A Gunnies' Paradise in Massachusetts!!!???

Last night, Bill and I were watching TV and tuned to Shooting USA. The show featured the Springfield Armory National Historic Site located in Springfield, Massachusetts. Bill and I have visited this place several times.

If you have been reading this blog, you know that we are not fond of Massachusetts mainly due to its ridiculous yet draconian gun policies. Yet, thirty or more years ago, the state was a haven for the gun industry and gunnies. The Springfield Armory is just one of many places that made guns in the state.

George Washington ordered the Armory's creation and it was later part of the Department of Defense. It made rifles for the United States military and it has made guns for soldiers since 1794. Its products have been used in every war America has fought since. There are probably Armory made M14 rifles in use in Iraq today. In its infinite wisdom, the government closed the facility in 1968 and ten years later gave it to the National Park Service to turn into a museum.

It is a wonderful museum for us gun nuts. As you drive through the gates, you can almost smell the gun oil. You enter into what had been the Armory's administration building--most of its workshops were on other parts of the grounds. The first floor is an impressive exhibit space. As you walk in, gun-making equipment and some gun exhibits are on your right and gun exhibits to your left. An information desk and museum store is right in front of you. The museum store contains many firearm reference books, posters, videos, and more.

The gun exhibit areas are full of rare firearms. The museum holds weapons that other manufacturers gave the Armory as part of competing for arms contracts. Large numbers of prototypes and firearms with very low serial numbers are exhibited. You can see the first Armalites that evolved into the M16, you can see M1 rifles, Thompson submachine guns, a M1903 with a Pedersen device that made the modified bolt action rifle into a semi-automatic. Most of the exhibit is chronological and you can see the development of firearms.

The gun making tools exhibit is impressive. Many ideas developed at the Armory were adapted to civilian manufacture of guns, shoes, and many other items. If you are lucky, museum volunteers who once worked at the Armory will tell you about the guns and the equipment.

One exhibit case tells of Armory employee, Erskine S. Allin, who cut the breaches of Civil War musket, added a hinge and created the Trapdoor Springfield--the US military rifle from the late 1860s to the late 1890s. Another case features employee John C. Garand who invented the M1 Garand and worked on the M14.

The heart of the museum is the second floor storage area. The Armory has a guided tour of this area for a $12.00 fee. Bill and I toured this area and here is the photo Bill took as we walked in the door. 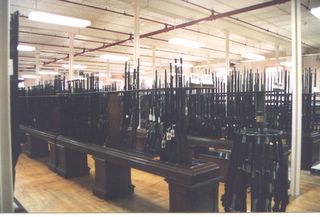 We were honored to see rifles with Serial Number 1 (the museum has 28 guns with this serial number), M1 rifles issued to soldiers who added magazines and converted them to full auto (in effect early M14s, but done in the field). There are numerous guns made in foreign countries our government acquired for comparison. In fact, the Armory based the M1903 rifle on the German Mauser and lost a patent infringement case. There is a small barrel full of Colt 1911s. The barrel was designed to be dropped from planes to resupply troops in Korea. There are well over 8,000 guns in this collection.

Some museums can show you one M1816 flintlock rifle; this one can show you dozens. There are too many guns to describe and this museum is a collector's heaven. The museum is a place to do serious research on guns in your collection and the website includes a research link.

If you are ever in Springfield, Massachusetts visit the Armory. Unfortunately, the site is hurting for money. The Shooting USA show mentioned there is only one conservator who preserves this collection. Being a government facility, it has few ways of generating funds for special programs. It also cannot advertise. If you go there, drop a dollar or five into the donation bucket, maybe join the Friends of the Springfield Armory. This is a worthwhile place to support.