It’s been awhile since I posted about shooting and gun collecting. It’s been a hectic eight months. Our new jobs came with a lot of new responsibilities as well as new rewards. Shooting and collecting got shoved off to the side.

I managed to get in some quality range and gun show time on September 13 (I know it’s been ten days, sigh). Yosemite was out of town and I was at loose ends. I got up early that day and headed to the NRA Headquarters Range in Virginia. I shot my bullseye pistol and a 1911. Even with a break in practice, the skills are still there. Good times.

Later, I headed to the gun show at the Dulles Convention Center. Coincidently, Sebastian and Bitter were there sometime during the day, but I didn’t see them.

This show was the largest I’ve attended and had an excellent selection. Here are a few highlights: a table with about ten transferable Thompson sub-machine guns; another with a full-auto and transferable AK-47, the first I’ve seen; an authentic matchlock; many flintlocks and other antiques; and lots more.

Of course, full-auto offerings are beyond my bank account. Still, I managed to add a “holy grail” gun to my little collection. Ironically, the vendor selling the gun is from New Hampshire. 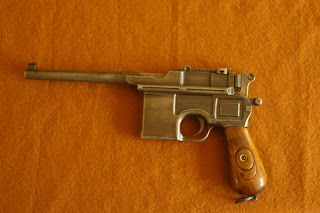 Yes, it’s another broomhandle Mauser. I love these old guns. This one is a “red nine.” The German Army needed more handguns during World War I and commissioned Mauser to build broomhandles that chambered their military round, 9mm. To differentiate them from existing 7.63mm guns, they carved 9s on the grips and painted the number red.

Mine has finish wear and the grips are worn, but the rifling is sharp, the bore is perfect, and it’s mechanically sound. All serial numbered parts match—including both grips. I took it home, dismantled it, and cleaned off years of accumulated gunk and grease.

To be political for a minute, I am basically a handgun shooter and collector. I can and do shoot rifles and shotguns, but my true love is handgun shooting, particularly bullseye. It challenges me and satisfies me more than any other shooting sport (or any other sport for that matter).

Pistol shooting and handgun ownership is suspect to people like Obama and Biden. I believe Biden when he said that Obama wouldn’t take away his over/under shotguns, but what about my handguns?
Posted by Denise was Here at 9/23/2008 02:45:00 PM No comments:

I’m going to be controversial today and make a voting plea. I’m voting for McCain (more happily for Palin) and I urge you to join me. There’s a lot at stake in this election.

Obama is a member of Chicago’s political machine with a thin resume and a huge ego. Enough said. Obama is one thing, but his ardent followers are scary. They want to bring us to a promised land of “progressivism;” where we’re gun free, there’re no criminals, we don’t eat meat, we ride bikes to our green workplaces, quality health care is free to everyone. A world that does not and never will exist.

They will try to force their vision on us so that we too will see the light. They want utopia and such people are threats to us all.

McCain is far from an ideal candidate (think McCain-Feingold, and his gun show opposition). Because of that, some people say they won't vote for the “lesser of two evils.” Others say that principle forbids them from voting for McCain. Still others say to vote your conscience.

Normally, I‘d agree with the last sentiment. But this election is too important to lose. We need every vote we can get, so here’s my plea. Vote for McCain to cancel the votes of these Code Pink members in this picture. Remember, they’ll vote for Obama. Cancel their votes.

I REMEMBER, but not every one does. 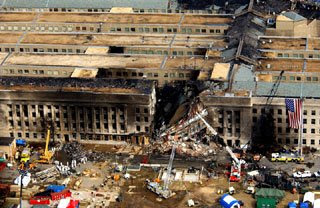 UPDATE (4:00pm): I dashed this off between meetings. Sorry I did not have time to really say what I still feel. However, here is a post I wrote two years ago that says it.

I have a few thoughts about the Palin pick. In short, it’s wonderful.

I haven’t seen the Republican base this fired up since Reagan.

Let’s face it, things have pretty much sucked for Conservatives since Reagan left office. We never really liked Daddy Bush and held our nose to vote for him and got rewarded with more gun control and a realization that we were not very good lip readers. It goes without saying that the Clinton years sucked for Conservatives and then we had another Bush come along that has been a bigger disappointment than Daddy. So, this election we were all prepared to hold our nose and vote for McCain, even though we knew he would suck(but not nearly as much as Obama) and what does that magnificent bastard do: He picks one of us!

Gun owner, hunter, at least some respect for limited government, hell, she’s even about my age, and is smoking hot to boot.

No wonder the Left and their media bitches are in a tizzy. In fact, it seems that Obama is now running against Palin.

I love how he is going on about her lack of experience and is attacking her record. Well, at least she has a record to attack and actually made real, live decisions instead of voting present most of the time. Real man of courage and change there Mr. Senator.

The more I think about it, the more I admire McCain's sheer genius in making this pick. Palin is like crack for the Left. They can't leave her alone. I've long said that if Obama could shut his mouth for 6 months, he would win the election easily. But that is one thing he absolutely cannot do. Obama & the Democrats certainly cannot keep quiet about Palin, who is a refutation of everything they believe in.

Finally, the icing on the cake is that the press has been so nakedly partisan in their hate filled diatribes against Governor Palin; they are finally revealed as complete shills for the Democratic Party. And mean and nasty shills to boot.

It's all great and I will greatly enjoy pulling the lever for McCain/Palin in November
Posted by Yosemite Sam at 9/09/2008 12:57:00 PM No comments:

Let's Not Have a "Great Leader"

Sometimes it takes a clown to tell the truth. Penn Jillette, a graduate of a clown college, tells it like it is in a CNN guest editorial. Jillette states,

…I don't think our next president being a great leader is a good thing.

I'm worried about someone smarter than Bush taking over that tremendous power. Charisma and ambition increase my fear exponentially, and a great leader scares me to death.

He goes on to say,

One of my liberal co-workers asked me what I wanted from government. I told him that I want government to leave me alone.

The only thing that Jillette said that I don’t agree with is his final statement,

…the only way to waste your vote is to vote!

The stakes are too high this time to not vote. Let’s defeat Obama-Biden, the most anti-gun and probably most anti-freedom ticket ever.