via Sebastian, we have the news that Fred Thompson is no longer seeking the Republican nomination for President.

Fred was the only candidate that we found palatable in this year's election and it's too bad that his candidacy never really took off. I doubt I will replace his picture on the sidebar with another candidate because frankly they all suck. But, I will still probably hold my nose and vote for the Republican nominee(unless it's Huckabee).
Posted by Yosemite Sam at 1/22/2008 02:50:00 PM No comments:

Cooper's View of the Election

Denise & I have done our civic duty and have added our 2 votes to the Fred Thompson column. Unfortunately, that column is pretty slim, only 375 votes at the current count. It looks like McCain has won for the Republicans and Obama and Hillary are neck and neck. But amid all this voting by humans, what does Cooper the Ten Ring's mascot think of the candadates. Well, Cooper, made his views known in no uncertain terms. 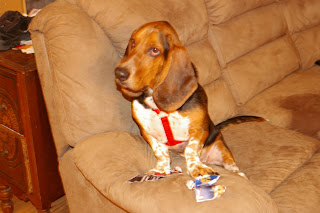 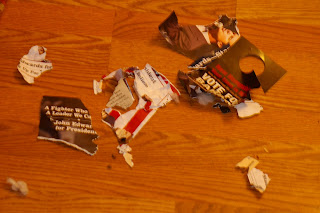 Maybe I was too optimistic

Via everyone, here is something that has me wondering if we really did win the Cold War or if it would have made much of a difference if the Nazi's had won the Second World War.

I don't want to hear anything about how much of a free country we are. Things like this just don't happen in free countries. I think my post from yesterday was way to optimistic about this country's future.
Posted by Yosemite Sam at 1/08/2008 10:27:00 AM No comments:

I know I said yesterday that my inspiration to rant was diminished because of my dour view of the future of our country, but here is an issue that really has me boiling mad.

Via Sebastian, Say Uncle and Joe Huffman, here is a letter from Citi Merchant Services/First Data to CDNN Sports in Abilene, TX. Citi Merchant Services is a company that handles the merchant side of credit card transactions. Citi Merchant Services canceled CDNN Sports account because, get this: "sale of firearms in a non face-to-face environment." They go further and state: "Keep in mind that a violation of the Gun Control Act occurs when a gun offered online is sold to an individual in another State; the act prohibits selling a handgun to a resident of another state."
I assume they are referring to the 1968 Gun Control Act, but obviously the person who made this decision is not a lawyer because that law only applies to non-FFL's. It is perfectly legal to transfer handguns across state lines and not have a face-to-face transaction if it is between FFL's. This decision certainly has implications for C&R license holders.

Citigroup is one of the biggest banking companies in the world. Say Uncle says he is going to quit doing business with them, but that may not be possible. Their fingers are into everything. If you do anything in the realm of finance: buy a house, invest, make a credit card transaction, sooner or later, you will probably do business with Citigroup.

This gets me to my main point and where I part company with most Republicans. I fucking hate banks. I loathe them. And within the banking category, I reserve a special, white hot, fiery hate for credit card companies. In my opinion, they are pure evil. Maybe this feeling isn't completely rational, but that's the way I feel.
Credit card companies, with the help and support of the government, have gotten the American people addicted to a diet of easy credit and seemingly easy money. This attitude has led to the sub prime fiasco, that we are currently dealing with, which may lead to the crippling of our economy. Now that our entire economy is dependent on these bastards, they are now applying their personal preferences on all of us.

So, if they decide they don't like guns, well, no need to push for a law, they can just deny all firearm transactions.

It's been awhile since I've posted a good rant, but to be honest, I haven't been in the mood.
I'm all fired up when I wake in the morning, I relate my rant du jour to Denise, and while I drive in to work, the rant dissipates and I no longer have any desire to put it into words. I am not sure why this has been the case.
I think a big part of it is the grim foreboding I have for the future of this country. My anger has gone beyond mere rants into despair and solemn depression.

But anyway, let me relate some of the reasons why I am in this state of mind. First a bit of background. I am a 40 something child of the 80's. I came of age at the time of Reagan's first election and many in my generation felt that we were at the vanguard of an unprecedented rollback in the increasing role of government in our lives. We saw gains in the most unlikely places: England, Canada, Germany, the Soviet Union, even California. Limited government seemed the wave of the future and after the fall of the Soviet Union, it seemed to be the destiny of mankind. But then something went unaccountably, horribly wrong.

It seemed that after the fall of the Soviet Union, humanity and particularly the West, looked at a future of greater freedom and liberty that was just in its grasp and choked. As the 90's progressed, governments that advocated more economic and personal freedoms were voted out of power. This accelerated in the 2000's with these governments expanding their power and influence, until today, where there is no facet of your life that the government doesn't take an interest. Government thinks it has a duty to tell us how we should eat, sleep, shit, screw, raise our kids, spend our money, drive our cars and how we die. There isn't a facet of our lives that government hasn't infiltrated and sought to restrict or regulate. Every day, I read about a new outrage that is occurring in Great Britain; so many that I am inured to it now.

But, the hell of it is, we have only ourselves to blame. The vast majority of Americans and other Westerners voted for the politicians that push these measures and continue to reelect them time and time again. The people of the West seem to have lost the desire for freedom and liberty and want the comfort of the all enveloping nanny who will take care of them from cradle to grave. I am at a loss in how to fight this trend. For example, look at the choices available to us in the upcoming election. Except for Fred Thompson and Ron Paul, the entire panoply of candidates pushes for big and expansive government programs that we are told will "Change" our lives for the better. Notice that I put change in quotes. All of these candidates are going on ad infinitum about change but when you look at their policies, it is all the same old programs that they have been pushing for over 50 years. This is change? Bull. America and other western countries don't want change. We want more government programs and we want to be coddled so we never have to make an important decision again. We want Mommy government to kiss our boo-boos and make everything better. We had a chance for change in the 1980's and we let it slip through our fingers.

But, here is the real reason for my disconsolateness. As I grow older, I've come to realize that all of the change and rollback of government in the 80's was an aberration. Government grew by leaps and bounds under FDR in the 30's and expanded from there during the Great Society programs that were passed when I was an infant. These programs were part of my life from the beginning, but they would have seemed a shocking power grab by the government to people who lived in the 1920's or earlier. It will be the same to people who are born when nationalized health care passes. This intrusion by government will be seen to them as a given and will be as much a part of the fabric of their lives as Social Security and Medicare is to mine. There will be no question of scaling the new programs back and the idea of eliminating them will be laughable.

People want big government and we advocates of liberty, freedom and limited government are too few to even begin to stop them.
Posted by Yosemite Sam at 1/07/2008 11:48:00 AM No comments:

NYT on Guns in National Parks

You may have heard that 47 Senators have asked the Department of Interior to lift its ban on “ready to use” guns in National Parks. This is a good thing, but the New York Times heard about it too and went off in high dudgeon.

Of course, they oppose the idea and state, “As so often happens when guns are in question, the senators have forgotten to insist upon the rights of the vast majority of citizens, who choose not to carry guns.” They don’t bother to explain why the rights of that so-called “vast majority” are affected. If those folks don’t want to carry a firearm then don’t carry one. It’s that simple.

The New York Times published this editorial at a time when a female hiker is missing and presumed dead. While the woman disappeared from the Chattahoochee National Forest which is under the purview of the Department of Agriculture, the lesson is the same. A woman who has a blue belt in martial arts cannot defend herself against a man who may have been armed with only a police-style baton.

The point the New York Times editoral board doesn’t get is that self-defense is not negotiable. Guns are the best tools for self-defense, and the best equalizer between a citizen and two or four legged predators.

The New York Times describes National Parks as places set aside for “peaceful preserves” in which guns have no place. Too bad we don’t all live in a world with unicorns and fluffy bunnies prancing around in predator-free preserves. No, we live in a real world.
Posted by Denise was Here at 1/07/2008 10:05:00 AM No comments: