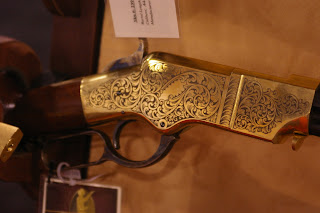 A small selection from a wall of Lugers 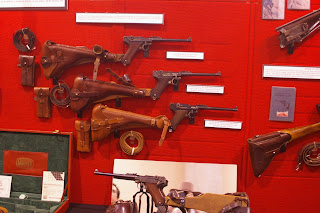 Yet another wall of guns, these were old military flintlock and percussion pistols 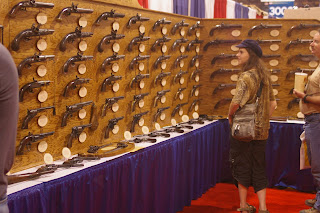 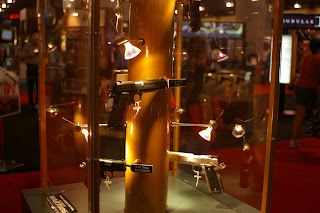 A future gunnie with a bulldog Gatling 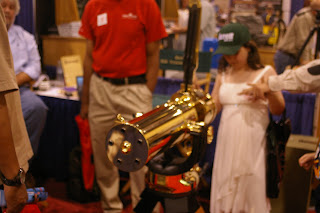 Finally, for the reloader who has a taste for serious cartridges, a Dillon reloading press for .50 cal BMG. That thing will give you an aerobic workout and a complete cartridge at the same time. 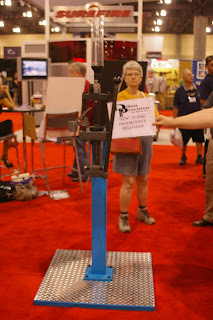 More Adventures in the Southwest

We've left Phoenix far behind and are doing the tourist thing again. We've seen and done so much already. (Still Blackberry blogging, so no pictures or links--we'll put some up later.)

Yesterday, we stopped at the Meteor Crater. Now that's a hole in the ground. What surpised me the most was the rim. It rises from the desert floor dramitically. The attached musuem was informative and one display allowed you to superimpose the crater over a map of Arizona. It pretty much covered Phoenix and this is a small crater compared to some of those on the moon.

We ended the travel day at the Petrified Forest National Park. The petrified logs are interesting. You're looking at a rock that used to be a living tree. You see knots where branches had been attached, bark, and tree rings--all in stone now. At the gift shop, we bought a little hunk of it. More junk for the mantlepiece, but it's purty. (The source of the petrified wood was from private lands.)

We are in Gila Bend now at the Space Age Lodge. We're being tourists again. Here is a little NRA Convention gun p0rn for your enjoyment. There are more pics to come as we find places with decent Internet connections.

A trio of cowboy rifles 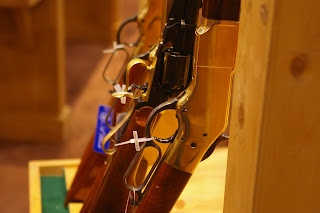 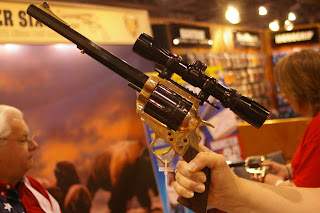 An engraved version of the .45-70 revolver 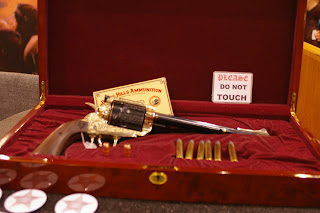 Ya want bling, I got your bling--gold plated Tommy Guns, got to love 'em 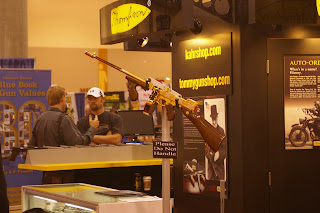 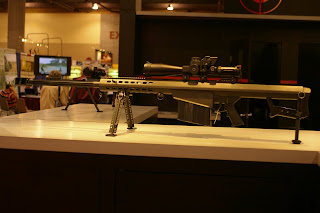 One thing that NRA Conventions have is seminars. This year, topics included sausage making, guns of World War II, concealed carry, identity theft, and others.

The NRA gets experts in a given field to discuss their topics. Yosemite Sam and I attended a workshop on handloading. I reload pistol and shotgun ammo, but I've long refused to reload rifle rounds.

I freely admit that I don't have the patience to do it. However, Yosemite Sam is thinking about getting started.

The presenters did an excellent job explaining all the how-tos. Even more interesting was a panel of industry representatives who shared their expertise in a Q&A session.

Most memorable answer came from Chris Hodgdon of Hodgdon Powder Company when asked how to tell if powder has deteriorated. First, if it has a strong ether smell, it's bad. Second, sprinkle a little on white paper and look for rust colored particles or dust. Finally, if it's warm to the touch, "throw it out yesterday."

Yosemite Sam and I attended the NRA banquet last night. Our only disappointment was the location of our table. They placed all the media/bloggers and some NRA staff (the more junior ones) in the back 40. We weren't at the worst table, but....

One of the staffers mentioned that they were expecting about 5,000 people, but demand was so high, they added another 1,000 seats. It was crowded and that might explain the table location.

Oliver North gave the keynote speech and was presented with the handmade flintlock. And, yes he channeled Charlton Heston's "cold dead hands" with it.

This was the second year that they separated the concert from the banquet, so dinner just ended after a young, talented lady sang "God Bless America." We're looking forward to next year.
Posted by Denise was Here at 5/17/2009 02:47:00 PM No comments:

We're sitting in the Annual Meeting and Wayne LaPierre is discussing the Assault Weapons Ban. The NRA is dedicated to fighting a new AWB. The sent a news crew to the border with Mexico and presented a story on that canard.

One official mentioned a freighter full of AK47s that came to a Mexican port bought by a drug cartel.

I can't promise that the NRA leadership has embrassed black rifles, but they are fighting to prevent a new AWB. Good enough for me.
Posted by Denise was Here at 5/16/2009 02:03:00 PM No comments:

He mentioned several things we gunnies should keep in mind. For instance, 40 percent of gun owners own their guns solely to hunt. I own guns for several reasons, recreation, collecting, self-defence, and hunting. I don't always understand hunters, but I must respect them.

Crossbow hunting can increase the time a person hunts by as much as thirty years. Older people and youngsters can't draw a hunting bow, but can use a crossbow. We need new hunters and retain them.

Finally, Humane Society of US does not care for lost animals, but is a political creature. It has used its name, virtually identical to the Humane Society, to gain members to the expense of the people who do take care of critters.

Pains in the Neck

It's my turn to be the sad clown now. Yosemite Sam and I wanted to go to the Ben Avery Shooting Facility north of Phoenix. In fact, it was on my list of must dos.

When we got there this afternoon, we found out they had adopted their summer hours (on May 12 no less) and they are closed this afternoon.

To really put the pain in the neck, the engine light in Yosemite's truck came on. We're now sitting in a PepBoys waiting for news. Sigh.

UPDATE: We finished at PepBoys. The problem was a gummed up throttle linkage. The heat probably softened some old dirt and was giving the linkage fits. The mechanic cleaned the throttle body and sent us on our way, a little poorer.
Posted by Denise was Here at 5/15/2009 07:17:00 PM No comments:

We can't put a picture yet, but we will soon. We checked in and got our media badge which let us get on the exhibit floor before the doors opened.

We listened to Phoenix's mayor welcome the convention. He mentioned that the banquet will be the largest single meal served in Arizona ever--6,000 people.

Then, the doors opened and a surge of people issued forth. This may be the largest convention we've attended.

Maybe it seems that way because of the convention center's architecture, but the registration lines were long, people were queued up at the escalators just to get to the floor. Simply amazing. And this is Friday, usually a slower day.

Soon we will leave the comforts of the press room and brave the crowds. I bet Paul Helmke is a sad panda today.

UPDATE: Here are the promised pictures:
Crowd waiting to register and enter the exhibit hall: 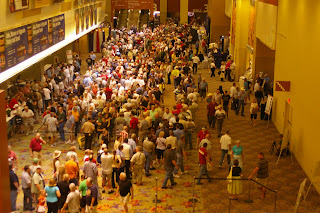 One of the exhibits: The top rifle is an M1 Garand. It was presented to John C. Garand on his retirement and is serial number 1,000,000. 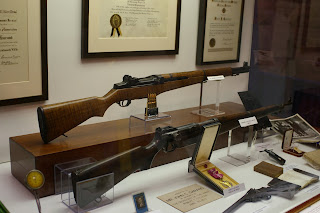 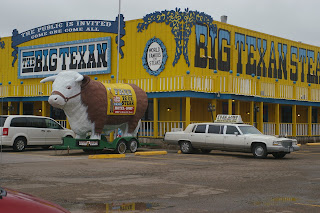 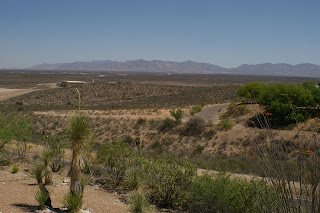 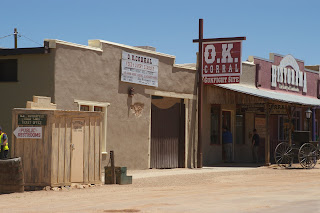 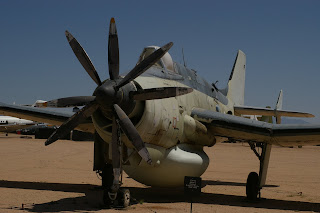 We're on the road again to the NRA Convention. I'm writing this from my BlackBerry, so there will be no links. No guarantee on no typos either.

We left Maryland on Saturday morning and drove 806 miles to Jackson, TN. Getting too old for long drives. So Sunday we up and drove 812 more miles to get to Amarillo, TX.

We stayed and ate dinner at The Big Texan Hotel and Restaurant--home of the "free" 72 ounce steak. Eat it all, plus salad, appetizer, potato and it is free along with the bragging rights. Saying we took it on and won would be a good story, but that's all it would be. We ate a much more prosaic dinner.

Well, Yosemite Sam and I are getting ready for our annual visit to the NRA Convention. This time it's in Phoenix, Arizona. Once again, we'll be blogging the convention and the Blog Bash. Through the Bash, we'll have media credentials which give us access we wouldn't have otherwise.

We are driving there this year. We're making a road trip of it and will visit many of the wonderful places in this country. We'll post along the way. See you later.
Posted by Denise was Here at 5/08/2009 07:01:00 PM No comments: