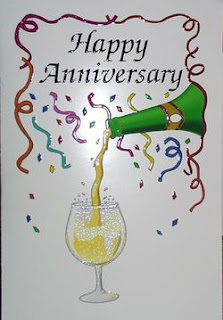 Yes, today is Ten Ring's anniversary. We started this experiment in public expression five years ago. In blog-years that’s like twenty people-years. Granted, Yosemite Sam and I haven’t blogged that much in the recent past, but we’re still around.

I’ve expanded my horizons on this blog. I’ve written about politics, the zen-like joy of shooting, the pleasures of collecting firearms, book reviews, and much more. I’ve even tried satire (and it's my favorite post).

I found out that blogging is a funny thing. You put time and effort into a post and you get few hits, few comments, and even fewer links to it. Then you toss off a post with little thought and effort. That’s the one that gets more hits than you know what to do with. For instance, I posted about a TV show I had just watched. It took me maybe ten minutes to write. Instapundit linked it and I had over 10,000 hits in less than two days. Wow.

I’ve learned to respect professional columnists, either on the right or the left. They have to produce one, two or more columns each week. Unlike me, they can’t say, “that’s been written about recently,” “I’ve written about that before,” or “I’m tired and just want to crash in front of the TV.” Writing is hard work, so hat’s off to the professionals even if I agree with very few of them.

I also found out that I’m an essayist. I can’t just throw out news links with a pithy sentence or two (I’ve tried). When I start to write, I just have to keep writing until I’ve explored the topic (hence an anniversary post that’s just too long, sigh).

So, I’ve enjoyed the last five years even though I feel a little guilty about the recent lack of content. I love reading your comments (hint, hint) and appreciate all of you who continue to read my scribblings here. I’m sure Yosemite Sam seconds the above. Thanks to all of you.
Posted by Denise was Here at 12/29/2009 09:15:00 AM No comments:

Seasons Greeting and a Sort of Apology

I've been a poor blogger recently and admit to feeling guilt. There are people who continue to read this blog, although I'm not sure why. After all, the new content can be printed out on a postage stamp. I would say sorry, but that would imply that I plan to get better.

I've said a lot in this blog and basically hate repeating myself. I also find that I am reading fewer blogs because the pace of my life has increased. Now, it seems like I barely have time to eat and maybe read a few pages in a book. The thought of reading anymore than I have to on a computer screen causes one of those pinchy little pains right between the eyes.

This is not one of those posts that announces I plan to quit blogging. No, not yet if ever. I like to make the occasional yawp into the ether. I like to put out a "gunnie book review" and sometimes even talk about politics. Lately though, politics has become a major pain in the pocket book and the ass. Health care, spare us that statist wet dream. Grumble, grumble.

So in general, this is to let you know I'm still around, still planning on blogging, but lightly, and still feeling guilty that I'm not doing so daily like I once did.

Also, it is a great opportunity to wish you and yours a very Merry Christmas or a Happy Chanukah. May your New Year's Day mark your happiest year ever (provided the government doesn't tax or regulate your happiness away).
Posted by Denise was Here at 12/24/2009 10:12:00 AM No comments:

Google Earth is an important tool that I use every day in my current job. During breaks, I often look at different areas of the country and I am always fascinated by what I see. The other day, I happened to be looking at Detroit and noticed something I have yet to see in other urban areas.

The center of Detroit is at coordinates N 42-19-54 W 83-02-48. Downtown Detroit from the air, if you zoom in, looks like a typical urban area. If you have street view, you can zoom in and this area, at least, looks like most northern cities.

Now pan to the east. Directly east of the downtown section of Detroit the landscape looks remarkably rural. Many blocks are filled with empty house lots and many of the houses that are left are often boarded up and derelict.

This is not confined to just one area of the city. 2846 Wabash St. at coordinates N 42-20-08 W 83-04-39 is even more derelict. The area looks like Iowa with block after block completely cleared or with one or two houses to the block.

Pan in any direction around the center of the city and one finds vacant lots and derelict houses. Even the color of the city has changed from urban grey to the more dun coloration one sees in distant suburbs.

What is happening and what can not be hidden when viewed from the God-like perspective that Google Earth gives you, is that vast sections of Detroit are returning to nature. What was once the pride of American industry and capitalism is transforming into an empty wasteland.

What gives me pause is that these Google photos were taken in June of 2007, before the recent market crash. I wonder what the city looks like today after the bankruptcy of Chrysler & GM and the real estate market crash? Instapundit has a link that shows that things are not getting any better in Detroit.

As we have mentioned before, Ayn Rand's Atlas Shrugged seems to be more prescient every day, almost as if Rand had a crystal ball and saw the future. Detroit reminds me of the fictional Starnesville, a once prosperous town that had transformed into a derelict wasteland after the collapse of the town's primary business, the 20th Century Motor Company. The company was run in an egalitarian way when the founder's children inherited the company. Before long, the company collapsed and the town it supported collapsed as well. The parallels between this fictional scenario and real life Detroit, Michigan are stark.

But are socialist policies the sole reason for Detroit's misfortunes? Pan across the Detroit River to Windsor, Ontario and travel to another world. The town appears prosperous and the majority of the blocks are filled with houses. Is Windsor, Ontario in Canada less socialistic than Detroit in the United States? I highly doubt it.

This issue, I think, is much more complex than it might appear at first glance. Socialistic policies that were promulgated by the government and the automobile unions are most certainly a factor in Detroit's downfall. But, also, the dependence of a city on one industry that has changed rapidly from a labor intensive process to almost full automation is a factor as well. Policies of high wages and pensions to workers whose jobs could probably be done by a machine is probably neither wise nor sustainable.

Whatever the reason, I still find it sad and disheartening to see the death of a once great city that was once the engine that drove America and the world.
Posted by Yosemite Sam at 12/18/2009 08:24:00 AM No comments: