I mentioned I had bought a new gun with my tax refund. It's a Winchester M1894 lever-action rifle. While cleaning it prior to a range day that'll happen in a few hours, I remembered that repeating rifles were the assault weapons of their day. That made me think how easy Brady Bunch, Million Mom March, and others demonize guns. So without further fuss, here is a parody.

PRESS RELEASE
Organization to Declare that Guns Are Bad

America is under the gun. Every day our lives and those of our children are threatened by gunmen with so-called licenses to carry concealed weapons. Underneath their coats one can find AK-47s, and vicious sniper rifles like .50 caliber Ferretts. Terrorists enter America to buy guns at our open-air gun-exchange bazaars where 13-year-old miscreants can buy machine guns, grenades, books, beef jerky, and the dreaded AR 15.

Our chief researcher, Tom Bradeyson, has discovered one more weapon, WinM 94, added to the battlefields that are our American cities. This weapon of war, a monstrous killing machine, will take its tolls in America's malls, schools, and churches. Terrorists will forsake all other deadly weapons in order to obtain one of these bullet hoses.

The weapon, really a "weapons system," is a light rifle with highly accurate sights capable of launching leaden missiles into bodies, cars, and buildings at distances of up to two miles. In semi-trained hands, its deadly cargo can hit airliners in flight. In untrained hands, it can strike at children in their classrooms. It is said to have killed more innocent deer in America's forests than any other gun. America is waking up to the dangers posed by WinM 94s in the powerful, deadly .45 LC caliber.

There are several features that make a WinM 94 more deadly than any one person has the moral right to wield. Deadly features found on a WinM 94 cry out for a total ban. If not for opposition from the NRA and fellow gun nuts, this fantastically evil weapon with its deadly child-killing features would be banned too.

A WinM 94--truly a horrendous example of a gunmaker's deadly art-- has many death-dealing features, which we depict and describe here.

A close up of a section called a receiver reveals many threatening features that make a WinM 94 a rapid-fire bullet distribution system. 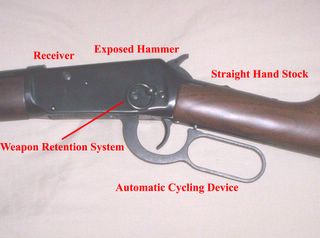 Its exposed hammer allows manually cocking, thus giving its terroristic user a choice to "lower the hammer" to carry it concealed with less danger to himself and then with a flick of his thumb bring his gun into play in perhaps your child's schoolyard.

A WinM 94 sniper rifle is equipped with a straight hand stock--a truly evil invention unlike a more familiar pistol-grip stock. Using a straight hand stock a shooter has great flexibility. He can spray-fire from the hip causing a "curtain of lead" to fly into a mall or school. He can use the straight hand stock to clamp his WinM 94 to his cheek and take accurate sniper-aim, or he can raise the gun overhead and fire in a deadly "plunging-fire mode."

A weapons retention system is provided so that a terrorist will avoid losing the weapon or have it removed from his hands by a police officer. Trained officers are capable of handling such weapons and retention systems and ownership should be limited to government officers and agents.

A WinM 94's "terminal distance alignment system" includes the dreaded buckhorn rear sight and a post front sight. Together these make this weapon of war easily and accurately pointed at an evildoer's target. That target could be your child, your airliner, yourself.

A WinM 94's ammunition is the final nail in this deadly coffin of death. We carefully placed a .45 Long Colt cartridge full of explosive powder next to a bottle of hot sauce for you to understand how large it really is. We believe shooters added "Long" to its name to make up for certain personal inadequacies. Beyond that, the cartridge is but a hair's breadth smaller than a .50 caliber bullet. 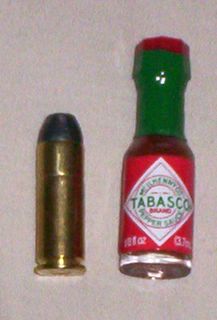 As we have seen, a WinM 94 is a truly deadly and frightening weapons system. We demand that our Senators, Representatives, police officers, mayors, and city councilpeople remove this destructive device from our streets.
#30#
Of course, this is a parody and I don't think I'm giving gun-grabbers any ideas. After all, they make up fiction better than I can. They have more practice.
Posted by Denise was Here at 3/06/2005 09:53:00 AM