I was thinking about what to post. I thought about the school shooting in Minnesota and realized I have little more to say. The shooter needed help and didn't get it from his community or relatives. Who knows if it could have been prevented. I thought about ideas I've had on why "progressives" want to ban guns so much. I realized I'm feeling inundated with news. Everything from Minnesota to our nation's fascination with Terri Schiavo. So, I needed a break from thinking about public affairs and decided to do another One From the Vault.

Loyal readers know that Bill and I have posted pictures and comments about the guns we own (see below for links). We're gun nuts and like to share our enthusiasm over guns we have chosen to buy. Neither one of us are gun photographers (scroll down for pics on this link) like Head--how he gets those professional quality photos, I'll never know. But, we still like to bore y'all with our efforts. So without further ado, I'm introducing you to my trap shotgun.

One reason I chose to show this gun is winter is almost over up here. I rarely do shotgun sports in the winter since I am not dedicated enough to stand in snow up to my knees. The club at which I shoot doesn't clear the field, so I let my shotgun rest for a few months. Now that spring is almost here, Bill and I will soon be getting our shotguns out for fun and games.

I shoot a Winchester Model 101 (Pigeon Grade). Winchester made a line of these guns in the 1970s and 1980s. They were all made in Japan, but are all extremely good quality. The model included a field grade, pigeon grade, and diamond grade with an XTR and lightweight thrown in for good measure. All are over/under, break-action guns. Some came in three barrel sets of different gauges.

So, here it is sitting quietly in its case.

My shotgun has an adjustable cheek piece and is fitted with Briley chokes. I usually shoot it with Skeet and Improved Cylinder chokes. I like open chokes even for trap, but I do get on the target quickly. Occasionally I throw in Modified and Improved Modified chokes depending on how well I'm shooting. I have other chokes that will fit it as well, but don't use them often.

My gun's barrels are 32 inches long. I like long barrels for trap and skeet since once I get the gun moving, I don't have to worry about stopping my swing too early. They are heavy enough that they keep right on going no matter what I do. It's more accurate that I deserve. The recoil is very manageable since the gun itself is heavy.

It's factory engraved. Here is a detail of the receiver:

One final photo is a close up of the pigeon on the underside of the receiver: 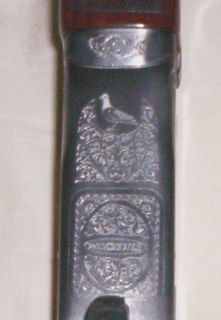 Together, this gun and I've gone through a lot of shells. Bill and I reload them using a Lee LoadAll II. We looked at fancy progressive reloading presses, but decided that a fifty dollar Lee would save us money in the long run. It's a fun little press.

My Winchester 101 once gave me a little trouble. One of the firing pins would stick and not hit the primer. A little cleaning and a drop of Breakfree helped. It's the only problem I've ever had with it.

What else can I tell you about it? It has automatic ejectors, a Pachmayr recoil pad, and lives in a Browning case. I love the figure on its walnut stock, unfortunately my photos don't do it justice. I bought it used and I've never regretted tossing my money on State Line Gun Shop's counter. I don't hunt with it, but I have a couple other shotguns for that.

So, soon my dear shotgun and I will be blasting clay targets from the sky. The reloading press will be cranking out reloads and I'll have a clay-busting grin on my face.