Testing Ammunition for A .22 Pistol

Mr. Completely posted the first Rimfire Roundup. I sent in a post, which is also on Ten Ring. In it I mentioned that I’ve been doing a lot of .22 handgun shooting in formal bullseye competition. It’s really improved my shooting.

I bought a bullseye pistol last year, a Sig/Hammerli Trailside, because I didn’t have a .22 pistol suitable for this sport. I spent a little time sighting it in, getting comfortable with it, and generally just shooting it for fun. Then I got more serious and last year I found out what ammo it really likes. I came across my old target sheet and notes and thought you might be interested in my results.

I tested six different ammunition types. I didn’t test any high velocity or hunting ammo since I won’t be shooting it out of my Sig. All except one of the six, CCI Blazer, are sold primarily as target ammo. I included CCI Blazer as a sort of control (don't I sound scientific). I’ve included current prices of ammo (all prices are taken from MidwayUSA). I couldn’t find a price for one of them as noted below.

I put six three-inch diameter shoot-n-sees on the back of an “Official NRA 25 Yard Slow-Fire Pistol Target.” I put the target at 15 yards figuring this would be a test of ammo and not marksmanship. In retrospect, I should have placed it at the whole 25 yards, but live and learn.

I propped my pistol on a rest—not a fancy rest that locks everything up tight, just something that would help me hold the gun steady and avoid too much deviation in the results. It’s not a perfect way to test ammo, but it is cheap. I fired five shots at each target. 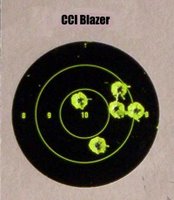 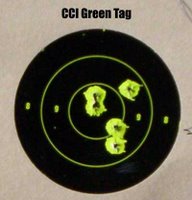 Next up was Federal Gold Medal ($2.99/50 about 6 cents per round). It tended to string vertically. 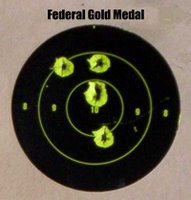 I tested CCI Standard Velocity next and was pleased with the results ($4.59/100 between 4 and 5 cents per round). I had a nice group all touching the ten ring. 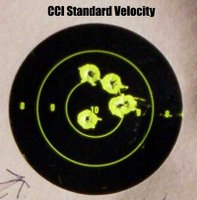 I followed up with Eley Standard ($3.89/50 or almost 8 cents per round) and found my tightest group even if it shot a touch to the right. 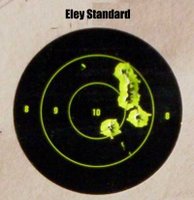 I finished with Federal Gold Medal Ultra-Match and was disappointed in the results (this is the only product for which I couldn’t find a price). My gun didn’t like it at all. It shot way to the left. 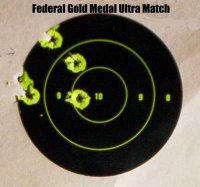 Since my test, I’ve stuck with CCI Standard Velocity. It’s surprisingly accurate for the price. I don't know how it'd compare with the super top-of-the-line like Eley's Match ammo, but it's served me well.

My ad hoc tests proves to me that for any type of precision shooting you must test a number of different brands. Each gun is different and likes what it likes. It’s up to you to figure that out.
Posted by Denise was Here at 2/08/2006 02:50:00 PM

What kind of guns a have interchangeable ammunition?
hunting