Well, I got nothing today. There’re days when posts scream to be let out. Other times an idea that perks below the surface until it becomes an essay. Then I have those days when a news story sets me off. Today, I got nothing except writer’s block.

So, what does a writer do when they she can’t write. She goes to other blogs and answers memes. Say Uncle started a house gun meme that other gun bloggers have picked up. Alphecca talked about it today, Tam at Books, Bikes, and Boomsticks covered it, as did Jay G and South Park Pundit.

Each blogger added something significant to the discussion, so I’ll probably muddy the waters, but here goes. I have a house gun that sits quietly by my bed just in case Bill and I hear an ominous bump in the night.

I know some people think that anyone who keeps a gun at hand is a paranoid gun nut. I also keep a fire extinguisher in my kitchen. Does that make me a paranoid extinguisher nut? Or does it make me a realist? No one will ever truly win that argument so fine, each to their own. You can choose to not have a gun, but don’t try to tell me not to keep one.

Here’s an example of why I keep a house gun (thank you Bruce of mAssBackwards). And, here is my house gun: 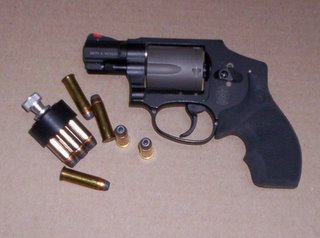 Smith & Wesson 340PD
You’ve met this gun before. Yep, it’s my snub-nosed Smith & Wesson that I’ve nicknamed Feather because it’s so damn light. I chose a snubby for a house gun after careful consideration.
First, if that ominous bump happens while I’m asleep, I may be groggy. I’ll need the simplicity of a revolver and a revolver is reliability personified.

Second, if I wake up with someone on top of me while Bill is sleeping next to me (the man could sleep through an earthquake), I need a gun that I can point and click quickly without it being taken away. A long gun doesn’t fit the bill.

Third, I need a gun that has enough power to stop someone. I keep Feather loaded with .38 caliber +P hollowpoints. I have a speedloader full of .357 Magnum cartridges in case I ever face more than one person or perhaps one person who just won’t stop.

Like Tam, Bill and I plan on forting up in our bedroom provided the “bump in the night” is not in the room with us. Our condo has three levels and a basement. A thief can get ourtelevision or anything else on the main floor or basement. It ain’t worth the risk for Bill and/or me to go hunting a possibly armed burglar in the dark. Further, my television isn’t worth the hassle I’d have to go through if I ever shot someone.

As part of our fortification strategy, if the bad guy decides his pickings are too slim and wants a little more action upstairs, I’d shoot him as he was coming up the stairs. For bleeding hearts; yes I’d feel bad if I ever had to shoot someone. Now here's a question for you. How would you feel if someone raped you or killed a loved one (you wouldn’t feel anything if they killed you) while you were waiting for the police to show up?

My strategy will not work for everyone because houses are laid out differently and there are different circumstances (I have no children, for example). This is only what I’d do, so make your plans accordingly. And you should have a plan just in case you wake up to a thief or worse in the night.
Posted by Denise was Here at 2/22/2006 03:36:00 PM