Denmark and "Men of the West"

My brothers! I see in your eyes the same fear that would take the heart of me. A day may come when the courage of men fails; when we forsake our friends and break all bonds of fellowship... but it is not this day! An hour of wolves and shattered shields, when the Age of Men comes crashing down! But it is not this day! This day we fight! By all that you hold dear on this good earth, I bid you stand, Men of the West!

In the movie Lord of the Rings: Return of the King Aragorn made this speech to his men when all looked hopeless. It’s a moving moment in a great movie based on an even greater book.

I’ve made few posts on Islamofacism, but all my work here is based on my freedom to own guns and to shoot them. I believe in individual rights, in freedom, while respecting the rights of other people. It’s my choice to exercise freedom and so long as I do it in a way that does not hurt others, then it's nobody's business but my own.

Recently we’ve seen a storm of protest in Middle Eastern states over cartoons that originally appeared in a Danish newspaper in September 2005 (Michele Malkin has many posts on this issue—here is one example). Danish Embassies have been burned, many flags desecrated, and threats of beheadings and death have been made. While Muslims have protested, Europeans have joined together in support of free speech.

While we should respect the rights of other people to practice their religion as they see fit, Islamofacists don’t see it that way. They believe that they alone are not subject to criticism or to change. They believe that their way is right and if you disagree with them, they must kill you in the name of Allah. It is a manifestly atavistic belief and has no place in any modern society.

This cartoon illustrates what is at stake: 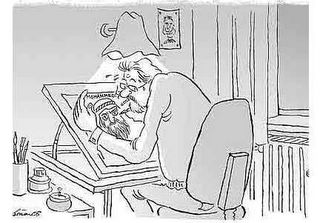 Festering anger at 12th Century fanatics who now live in Western countries may have come to a head and Denmark is in the vanguard. Terrorists attacks that kill 100, 1000, 3,000 people don’t raise Europe’s ire, but Islamofacist overreaction over a handful of cartoons of Mohammed do. Interesting. But small things have always led to big things. World War I was started when an anarchist assassinated an archduke in a city located in a region that many British, French, American, and German citizens couldn’t locate on a map.

We may not be looking at war against Islamofacists, but we may be seeing the start of an awakening. We may see scales falling off of European and maybe even American eyes. People may be realizing that a handful of savage religious fanatics are a threat to our freedoms. If these riots are the start of something bigger, Men (and Women) of the West keep your powder dry. It’s going to be a long battle.

Yosemite Sam (Bill) and I support the Danes and other Europeans who are beginning what could be a violent struggle. We are raising a Support Denmark mini-banner on our sidebar and are leaving you with this one, courtesy of the “Dissident Frogman.

UPDATE (9:45pm): Blogspot had problems this weekend and a few words of my post were cut from my rough draft when I pasted it into Blogger. I put these back and corrected a couple of mis-spellings (can't blame Blogger for my lack of typing skills).
Posted by Denise was Here at 2/05/2006 01:24:00 AM