The Untied States is a nation of crack shots or so we’re told. You can't always tell when you look at what countries win medals in Olympic shooting.

Yesterday Jay Hakkinen of Alaska placed 10th in the Twenty Kilometer Individual Biathlon; the first time an American athlete placed in the top 10—ever. Four years ago in Salt Lake City Hakkinen placed 13th in the same sport—then the highest American placement. 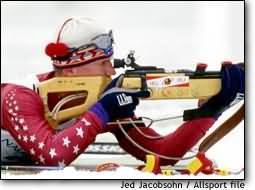 Jay Hakinnen
First a brief description of the sport. There are several variations of Biathlon in the Olympics and each has different rules, but it’s basically a skiing race coupled with shooting.

In Individual Biathlon, competitors cross country ski and stop at four shooting stations. They unlimber a .22 caliber rifle they carry on their backs and shoot at five small targets fifty meters away. They must shoot twice from the prone position and twice from offhand (standing). There are no bench rests, no scopes, no red dot sights although sophisticated peep sights are used. Competitors are assessed a one-minute penalty for every missed shot.

A competitor must engage in an aerobic activity using lots of muscle groups and then stop, calm the quivering muscles, and shoot. When you watch close ups of the shooters on the line, particularly when they’re offhand shooting, you can see their rifle muzzles bouncing to their pulses. It’s considered by some to be the most difficult winter sport.

Hakkinen skied the second-best time, but had too many misses to medal. He had bad luck in his event when one of his bullets split on the target and failed to knock it down. Had the target counted he would have won the bronze medal. He’s a great athlete and deserves our accolades, but I have to ask why doesn’t America dominate all the shooting sports?

Shooting’s fun and in the United States we don’t have to specialize if we don’t want to. In my own shooting, I can shoot an action sport or I might shoot bullseye or skeet or test reloads or just plink cans for the heck of it. Europeans on the other hand tend to concentrate on getting really good at one sport and then win the support of their governments and societies. In fact, Biathlon is Europe’s most televised winter sport.

I’d like to see America win more medals and do more precision shooting, but I don’t want to give up my gun freedoms to do so. Still, it would be nice to see an American up on that podium one of these days.
Posted by Denise was Here at 2/12/2006 01:52:00 PM

Many various types of shooting sports are available that played with using different types of shooting equipments. Biathlon is combination of skiing and shooting that's a winter sport of usa as well as organize in olympic winter games.