This post is a gratuitous picture from the NRA Convention. I had warned you mentioned to you that occasionally we would share a few photos we took at the convention. We'll do so in context of other happenings in the gun world, since other people's travel photos can be boring.

Publicola recently had a post about Barrett Firearms. Barrett makes fine .50 caliber rifles and other guns. In fact, Ronnie Barrett created practical .50 caliber long-range rifles for the civilian market. Police and military analysts recognized how useful the rifles were and started buying them. Now, these originally civilian rifles are demonized as "weapons of war." California banned civilian ownership of them. Barrett did not take it lying down and has refused to sell to any California government.

Here's a photo Bill took of a sign at the Barrett display at the NRA Convention. Give 'em hell Ronnie. 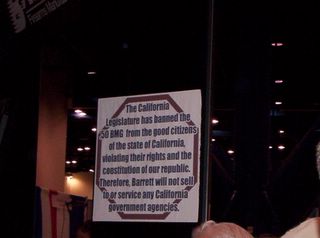