Work kept me busier yesterday than Lucille Ball near a pie factory’s conveyor belt and I apologize for the lack of gunnie goodness . I’m home sick today. I picked up a virus or another form of cootie. I felt bad yesterday, but was laid out this morning. I won’t go into details, but I wouldn’t wish this crud on Sarah Brady.

I did a post the other day on "Women and Gun Buying" and I received one FoxNews spam (ahem) and five great comments that got me thinking.

Egregious Charles mentioned how his wife found a nice, clean gun store but the owners talked to him and not her. When she and Charles went to a messy store the owners talked to HER. Guess where she bought a gun. Yep, the place where they treated her as an equal albeit a neophyte. Having a clean store is good, but it’s better is to treat people right.

KCSteve points out gun store owners and clerks who understand that women represent a huge customer base. OldeForce says women and their men should stand up to gun store clerks who don’t get it. They’ll get the message eventually.

It’s great that gun stores realize there’s a new market out there. That’s not to say that there aren’t curmudgeons out there who need educated, but getting women to buy a gun is the main thing.

Seth from Massachusetts started me thinking about a different issue. He responded to a line in my post about some manufacturers who build guns for women. He said, "I remember about 20 years ago seeing in a dealers case a little .25 auto pink in color with white grips with a flower decoration, and thinking ‘Gee, what a stupid sexist creation by an obviously male chauvinist pig designer….’" His statement begs the question: What is a woman’s gun?

I own a number of guns ("more than a need, but not as many as I want" to quote Tom Gresham). My parents gave me my first gun on my thirteenth birthday. I still have that gun and it’s one of my treasures—a pump action Remington Fieldmaster 572. Not one of my guns has white grips with or without flowers. I don’t own any pink guns. The closest I have to "frou-frou" guns are a stainless steel Ruger Mark II and a nickel-plated revolver.

I don’t like shiny guns. I prefer blued-steel and decent wood. Any yet, every now and again I’ll go to a gun store and see a set of decorated grips. They speak to me and I’m not sure why.

There are many guns marketed to men that look pretty frou-frou to me. Even a man’s man like George S. Patton carried guns with ivory grips. Here’s a Smith & Wesson for example. 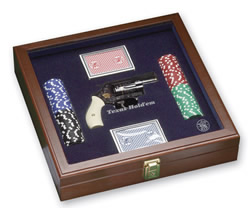 So that confuses the question even more: What is a woman’s gun? There are a few things that a woman needs to look for. Does the grip fit her hand or is it easily modified? Is the stock of a long gun too long for her reach? Beyond concessions to anatomy; here’s my final answer. A woman’s gun is anything she wants to buy. She might want an AR-15 with pink furniture. She might want a Holland & Holland double gun (I hope she has the bucks).

So if there’s a woman in your life who’s thinking about buying a gun encourage her to spend her money on any gun that strikes her fancy after she understands what to expect (i.e., don't expect a .454 Casull to have little recoil).

Well, we know that each woman can only know which is the right one for her, but here are the top 10 choices women are making when purchasing a handgun which can help to narrow the field of options for you. Remember, what is right for one woman may not be right for another, so when making your choice it is important to consider all of the variables that may be unique to you such as, hand size, recoil sensitivity, location and reach of the controls and their ease of operation.