Baikal IZH-35M
What’s the nicest thing one could say about this ugly duckling of a gun? How about that it shoots extremely accurately and reliably? 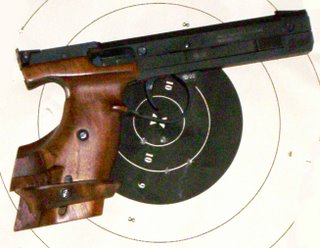 Bill's Target Pistol
Yosemite Sam’s (Bill’s) uses a Baikal IZH-35M as his bullseye pistol. It’s a semi-automatic target pistol chambered in .22 long rifle made in Russia and was once imported by European American Armory (EAA).

It’s an interesting hunk of metal when you start looking at it. The slide sits under the barrel. What appears to be a slide is really an immobile upper cowling. Instead, you push back two tabs near the gun's muzzle and thus shove the internal bolt back. Its hammer is exposed, sort of. It sits on top of the gun when it’s cocked. When you pull the trigger, the hammer drops like a trapdoor. A red dot on the hammer’s top serves as a loaded gun indicator. The slide doesn’t lock back when you fire the last round, so it helps to count to five as you shoot it.

I mean five because that’s its magazine capacity. After all, it’s designed for bullseye shooting. The gun comes with two very over-engineered magazines. There’s a lot of steel in these puppies, so much so I’d swear they could hold up a tractor.

An IZH-35M doesn’t have a pretty finish. It almost looks like factory workers polished the steel with a hammer before bluing it. In fact, bluing is a misnomer. It’s more of a dark-grayish brown color. The ergonomic grips are smooth and utilitarian, but also not pretty. But, how a gun shoots is the main thing.

Bill has put about 3,000 rounds through his gun. He hasn’t had a misfire, failure to feed, or failure to eject. However, he did have a problem with the grip safety. If he didn’t hold the gun just right, he couldn’t engage a very minimalist grip safety and the gun wouldn’t fire. We solved that problem with a piece of duct tape to hold it closed. A gunsmith friend said that Baikal added a grip safety to satisfy complicated Federal import guidelines. Whatever the reason, it’s very much an afterthought. Import though has only happened since the fall of the Soviet Union.

Baikal pistols were rarely seen in America while the Soviet Union existed. You did see them during competitions with the Soviet Olympic Team. Bill’s IZH-35M is basically the same gun as they used with some changes as the model improved.

Partly because of its pedigree as a professional shooter’s tool, the gun is very user friendly. Bill can adjust the trigger in several different ways. One screw changes the trigger’s position relative to the grip, another screw changes its pull weight, and another adjusts its take up. Surprisingly for a target pistol, it has a two-stage military-style trigger. One must take up the slack before the real trigger pull begins.

As you might expect, it’s a very accurate pistol. Its rear sight is completely adjustable and nicely frames its front sight. The barrel is attached to the frame. The gun is heavy enough that you scarcely feel recoil and it returns to its point of aim very quickly. The grips help ensure proper placement of Bill’s hand and trigger finger. If you’re a southpaw, you're out of luck. Baikal doesn’t make a left-hand model and there’s no practical way to shoot the gun left-handed.

IZH-35Ms impressed another gun maker, Walther. They bought many from Baikal and refinished them, added new grips, crafted a slide stop, and called them Walther KSP200. They even made a left-handed version.

Baikal is a trade name for Izhevsky Mekhanichesky Zavod, a company formed in 1807 to make ammunition. It branched out to guns and armed Czars and Commissars. After the fall of communism, the factory became self-supporting and is profitable. EAA used to import Baikals and may still have a handful for sale. Remington bought Baikal’s shotgun line for importation, but to the best of my knowledge they didn’t pick up Baikal’s pistol line. Remington sells the shotguns under its Spartan trademark.

Things happened for a reason so be thankful for everything. Thank you for your wonderful article. I hope you could inspire more people. Please visit my site.

Wow. Awesome article. Please do more articles like this in the future. Very informational and knowledgeable. I will expect more from you in the future. For now i will just bookmark your page and surely I'm gonna come back later to read more. Thank you to the writer!