M1 Carbine
In some ways, the M1 Carbine was America’s first assault rifle. It was a relatively small, light, magazine fed, rifle. One M1 Carbine model was fully automatic, and another even had a folding stock. In other ways, it’s not an assault rifle. Its cartridge is really a slightly beefy pistol cartridge instead of a scaled-down rifle cartridge and almost all are semi-automatic. It’s definitely a weapon in the middle.

M1 Carbines also stand somewhere between a rifle and a pistol as well as being between a battle rifle and an assault rifle. Still, it fulfilled a role in World War II as significant as that of its larger cousin, the M1 Garand (“One From the Vault—M1 Garand”).

Even though it wasn’t a battle rifle, more M1 Carbines were produced than M1 Garands. American factories built more M1 Carbines than any other small arm—6,221,220 of them during the Unites States’ involvement in World War II. It also saw a great deal of use in Korea and Vietnam. 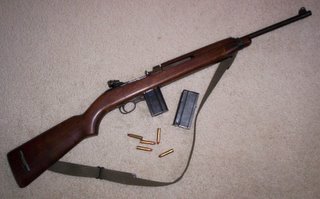 My M1 Carbine
The idea for a light rifle began after World War I when generals realized that such a rifle could be useful. Artillery crews, tank crews, rear-echelon people, and others needed something more powerful and accurate than a pistol, but something light and easily stowed or carried while doing their duties. The War Department also was about to create a paratrooper corps, which would also need something other than a full-sized battle rifle.

As is usual with these things, the government formed a committee, which included John C. Garand, to evaluate light rifle concepts and later inspect prototype rifles. The government issued specifications and called on gun manufacturers, gunsmiths, and inventors to submit models for testing and evaluation.

Winchester had been working on a light semi-automatic rifle for a while. They had a few technical problems, one of which was solved by David “Carbine” Williams when he invented a short-stroke gas piston to drive the gun’s action. He created his initial design while he was in prison for killing a Federal revenue officer. He was later pardoned when the killing was ruled self-defense. He perfected the design later and he along with other Winchester employees made the gun possible.

Gradually, Winchester’s prototype started to look like an M1 Carbine. In May 1940 trials with Marines showed their prototype’s bolt wouldn’t work well in sand. Winchester put in a Garand-style rotating bolt and created the first M1 Carbine. 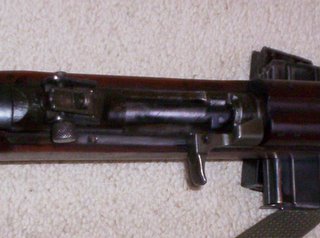 M1 Carbine Action
In September 1941, the War Department evaluated Winchester’s prototype and accepted it with a request for a few modifications. Contracts were finally let just two weeks before Japan attacked Pearl Harbor. The M1 Carbine was born just in time for America’s entry into World War II.

America faced a shortage of arms for its troops. The War Department contracted with ten manufacturers to make M1 Carbines. Of the ten, only Winchester had ever made guns before. Companies like Inland and Saginaw, divisions of General Motors, built automotive parts (Inland eventually made the most M1 Carbines). Office machine makers like National Postal Meter, International Business Machines (IBM), and Underwood joined inland and Winchester. Even a jukebox maker, Rock-Ola, got a contract.

Soldiers adopted the little rifle and most liked it partly because it was only about half the weight of an M1 Garand. It also adapted well to jungle-covered islands in the Pacific Theater. There were a few reports that it lacked stopping power. Compared to an M1 Garand, those reports are probably true, but it had a fifteen round magazine—almost twice as many rounds as an M1 Garand holds. Paratroopers also liked M1 Carbines, but theirs were given pistol grips and folding wire stocks. These were named the M1A1 Carbine. 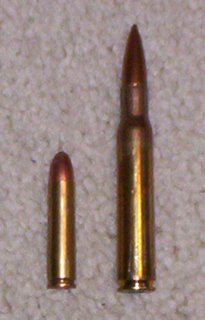 M1 Carbine Cartridge (M1 Garand cartridge [.30-06] on right)
Late in the war, but in time for Korea, factories built a fully automatic version called the M2 Carbine. It worked well, but not perfectly. Stopping power was again questioned particularly against enemies wearing quilted winter uniforms. Korea’s bitter cold also led to malfunctions that didn’t seem to affect the semi-auto version. A final official model was the M3, basically an M2 with an infrared scope. The scope was bulky, but it was used to good effect in battle at Okinawa near World War II’s end and in Korea and Vietnam.

Many carbines went through a series of arsenal rebuilds, which included the addition of adjustable sights, new safeties, new magazine catches, internal parts, and a bayonet “fixture.” It was not a bayonet lug welded to the barrel. Instead it’s an extended barrel band. Because of rebuilds, it’s very rare to find a carbine that looks like it did when it first left the factory and these carry premium prices for collectors.

When you shoot it, there’s very little felt recoil and it comes right back onto target. I also have had no failures to feed or to eject. Not too bad for something made over 60 years ago. It’s a real joy to shoot. I can understand why most soldiers fell in love with their M1 Carbines.

As a collector, I am looking for an M1 Carbine made by Rock-Ola simply because I want to own a gun made by a jukebox maker. But, what the heck I already own one made by a famous computer maker.
Posted by Denise was Here at 1/18/2006 02:33:00 PM