Every now and again I mention movies from a gunnie perspective. I’ve discussed scenes from Shaun of the Dead, Serenity, and War of the Worlds with varying levels of detail. Ten Ring is not a movie blog by any stretch of the imagination, but I really like movies and I write about what I like.

One genre I like is war movies. I admire soldiers who risk their lives or die for us. My father was a bomber pilot in World War II, so I come by that respect honestly. I guess I like war movies because of my libertarian streak. The best of them show people fighting for a better way of life against fascists, communists, and any others who want to spread their beliefs to unwilling people.

The Great Raid is an excellent example of a good war movie. It came out in August 2005 and immediately sank like a rock in the box office. It cost over $80,000,000 to make and took in $10,761,247. Critics panned it although not universally (Roger Ebert for example liked it). One complaint many critics made was it took too long to get to any action. That could be because action movies and television have reduced our attention spans and…I’ll not climb on that soapbox for now.

By these measures, The Great Raid failed, but I still wanted to see it when it first came out, but it didn’t stay in the theaters long enough for me to do so. I had a Barnes & Noble gift card and used it to the buy the “director’s” cut DVD. I watched it the other day and I loved it. Yeah it took awhile to get to the action, but that’s war. My dad once mentioned to me how long it took to fly to a target and how short a time it took to drop bombs and then how long it took to fly back home.

The Great Raid is based on a true event. In the story, Americans are being held in Japanese prison camps in the Philippines. The war is coming to a close, but the Japanese plan to kill American prisoners as they retreat. It opens with a scene, also from true life, of Japanese soldiers forcing Americans to enter air raid dugouts and then pouring gasoline on them. Over 150 Americans from the Padwan camp were killed by being burned alive.

American forces suspected such horrors were being done and received intelligence on the Cabanatuan camp. It was near the front and Japanese troops killed prisoners only when American troops were too close, so Cabanatuan’s prisoners would probably die soon if help didn’t come. To give it credit, The Great Raid didn’t shy away from Japanese atrocities in the interest of political correctness.

The Great Raid tells how Army Rangers and Philippine guerrillas banded together to execute a simple but ultimately successful plan including a one-mile crawl of about 100 American soldiers over open ground to the prison camp. The plan succeeded. All prisoners were rescued with only one prisoner dying of malaria before he was brought back to American lines. Besides this prisoner, only 2 Americans and 21 guerrillas were killed, but over 800 Japanese soldiers lost their lives. 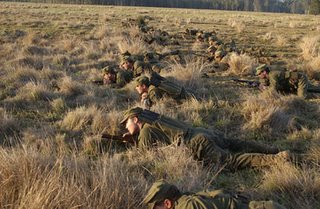 Crawling to the Camp

The movie had some genuinely slow moments and tried to put in a love story. Margaret Utinsky was an American nurse who managed to stay in the Philippines and work as a nurse (she may have had a Lithuanian passport). She smuggled medicines to Americans in prison camps. The moviemakers created a love interest for her in Cabanatuan. In doing so, it arguably cheapened her real-life heroism.

The movie was also filmed in a muddy, grainy, albeit realistic way that leaves me a little cold. I like vibrant colors in my movies, but that’s just me.

The gunnie parts of the movie were great. There were excellent shots of M1 Garands, Nambus, M1 Carbines, 1911s, and others. So far as I can tell the guns were accurate and well-handled. Here is a picture of guerrillas. One is armed with a Thompson, but one is carrying an Enfield on his back. This is probably just the sort of mix of weapons a guerrilla band would have. 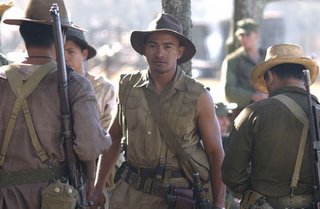 Guerrillas and their Weapons