A Broomhandle Mauser and BBAGA

This post is my attempt to partially participate in Mr. Completely’s excellent idea, Blogger-Buy-A-Gun-Anniversary (BBAGA). Mr. Completely proposes that gun bloggers should buy a gun on each anniversary of their blog. He goes on to say one should buy a goodly supply of ammo, as many accessories as possible, take the day off of work, shoot up all the ammo, then buy more ammo on your way home.

I can only participate partially in BBAGA because my blogiversary was December 29 and I couldn’t take the day off. I was holding down the fort while others were on vacation. I thought I’d get out over the weekend to belatedly do my BBAGA duties, but holiday weekends bring certain responsibilities and activities. Yosemite Sam and I didn’t go out shooting even though we’d planned to. It would help though if New England’s weather was just a little more clement. It’s hard to shoot well when you’re shivering too much to aim.

Still, I have satisfied the major tenet of BBAGA, because I bought a new gun the other day (albeit not on Ten Ring’s actual blogiversary). In the interest of full-disclosure I actually had it on layaway for a month and paid it off. I already mentioned the gun in my Merry Christmas post. It’s my first gun of 2006 or my last gun of 2005 depending on how you look at it.

The gun is a Broomhandle Mauser. It spoke to me in the gun store. Actually, it shouted at me and all but grabbed me as I walked by. It has its original wooden shoulder stock/holster with an intact leather “frog.” The gun and stock is in good condition and it has a decent bore. In fact, after a good cleaning and bore-snaking it has a nice, bright bore with only slightly worn rifling. Because I know how much you all like gun p0rn, here is a view of my BBAGA gun with stock.

My new pistol has all matching numbers. Certain Lugers and Mausers (and other guns too) required hand fitting, but this led to problems putting parts back together again if a gunsmith/armorer mixed up parts from more than one gun. To solve that problem, gun makers put the last two or three digits of the serial number on almost all parts so that a gun smith could reassemble the gun correctly. When a gun has all matching numbers it means you have an original gun and not something cobbled together from leftover parts. Collectors like “original” guns.

The only drawbacks on my new gun are that it has been re-blued which takes a little away from its collectibility and it’s missing its lanyard ring. The price was too good to pass up though especially when it included the shoulder stock and the store owner gave me a “good customer” discount.

Frequent Ten Ring readers know that I already own a Broomhandle. My other one is a Bolo model made for the commercial and police trades. Bolos have a shorter barrel and a smaller grip. Over all, it’s a more graceful gun than a full-size Broomhandle. Still, I wanted a full-sized Broomhandle made during World War I. My new pistol fits the bill on both counts. And, here's a close-up. 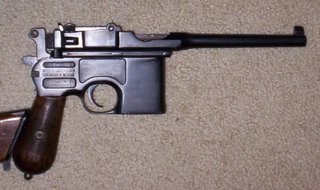 I won’t be shooting my new gun for awhile just as I haven’t shot my Bolo yet. I need to buy a new bolt stop before I shoot it. Bolt stops on Broomhandles are numbered parts and are usually the first part to break if a part is going to break. I don’t care if I lose an unnumbered substitute part (although I’d care if the bolt flies into my face, but that’s another story). Based on dates of manufacture both guns are at least 80 years old and that includes all their primary parts. When I’m 80 years old, I hope I’m still around with all my parts and that they work too.