I finally got to St. Louis. I couldn't get out of work and Yosemite Sam drove here without me. I flew here this morning and we managed to locate each other in all the craziness of the convention center (what did we do before cell phones). I got here just barely in time for the opening ceremony.

This year's opening ceremony was marked by a political event. Chris Cox directs the lobbying arm of the NRA. He introduced a number of Missouri state legislators, then the state's Lieutenant Governor, and finally Governor Matt Blunt. The legislators had just passed a law that forbids any state or local police department from confiscating guns or ammo in an emergency. Blunt affirmed his support for the Second Amendment. He then set at a desk and signed the bill into law. 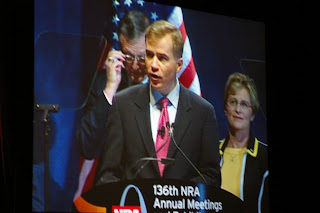 Now to the festivities. Ty England provided the entertainment at one time crooning to Sandra Froman (NRA President) on stage. He's an ardent gun supporter who gave up a recording contract when he refused to go on the Rosie O'Donnell show some years ago. He now has his own label. 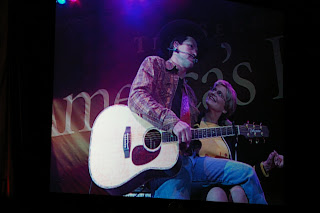 Hamming it up on stage
Finally, we see that Sebastian mentioned that the American Hunters and Shooters Association paid people to hand around with signs. Here's a picture if Sebastian can't find one. 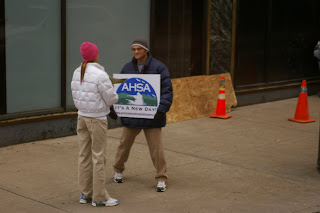 We explored the exhibit hall for awhile and then I crashed in the hotel. I'm not the world's best flyer.

We're staying about a block from the convention center and enjoyed a soul food buffet spread. I even stayed awake.
Posted by Denise was Here at 4/13/2007 08:00:00 PM