One of our goals on this trip is to buy a gun for Buy a Gun (BAG) Day. I wanted to check out a particular gun store in Ohio, which we will do tomorrow. If I buy anything there, I will declare it my official BAG Day purchase and let you know.

For now, I have an unofficial, secondary, non-primary BAG Day purchase to share with you and if I don't find anything in Ohio it will become my official BAG Day gun. I bought it two weekends ago because it spoke to me.

It wasn't in the world's best condition when I found it and I had to disassemble it, remove old grease and dirt, and brush off a small amount of rust. Once I reassembled it, I had a very good and welcome addition to my collection.

Because Yosemite Sam and I are traveling, I only have one shot of it that was already on the camera. Without any further ado here is my unofficial possibly secondary BAG Day gun: 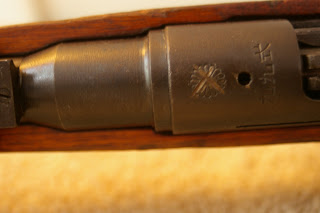 All of you probably know what it is. If you don't, it's a Type 99 Arisaka battle rifle used by the Japanese Empire in World War II. Mine has a semi-intact mum as you can see in the photo. It looks like someone passed a file or bayonet across it.

Most Arisakas were marked with the Imperial symbol, the chrysanthemum. When the Empire lost the war, they turned over weapons, but before doing they ground off the mum. Most Arisakas you see now have a area where the mum used to be.

I like to think mine may have been a battlefield "bring back." Many Japanese soldiers before surrendering would deface the mum somehow so gaijin would not defile it. I can't prove that this is what happened to mine, but when I disassembled the gun, I found small pieces of grass between the barrel and the stock as well as a liberal amount of dirt.

Of course, the grass is just as likely to have come from an importer's poor handling practices, someone using a surplus gun for hunting, or a myriad of other sources. Still, I have a probably naive dream of it having been used on some god-awful Pacific island. Then some desperate, starving Japanese soldier sawing away at the mum before he hugged a live grenade.

It's possible, but the gun can't tell me how the mum was partially defaced and how the grass got under the stock. Still, it's a very welcome addition to my World War II firearms collection.

My Arisaka is an earlier one (I need to do more research before I can figure out the date). It has a monopod attachment and the aircraft sights (little wings attached to the sight that supposedly showed how much to lead an airplane to shoot at it more accurately).