Sorry to not update our NRA experiences until now. We had to get on the road. We’re still in Missouri, but exploring now. We’re going to take the road east tomorrow.

As usual, the NRA banquet ran smoothly. Even the food was halfway decent for convention food. They served a chicken breast cutlet with a small filet mignon. The chicken was about what you’d expect on a convention floor. A little rubbery, some flavor, but nothing to write home about. The filet though was much better. Mine anyway was tender, flavorful, and gone all too fast.
Former UN ambassador John Bolton gave the keynote speech. He talked about international threats to our gun rights. He said the people that oppose civilian, or "non-state actors," are persistent and dedicated to their goals. They believe taking away guns from you and me while allowing certain elite groups and "trusted" groups like soldiers and police retain theirs will somehow lead to utopia. He warns us to keep fighting. 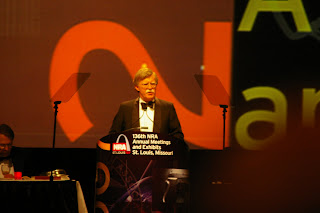 Of course, he received the customary gift flintlock handcrafted rifle. Nice gift and because he’s no longer a government employee he will probably be able to keep his. 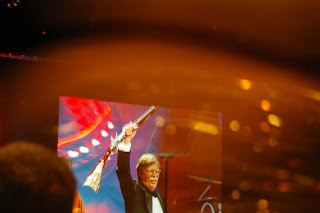 Comedian T. Bubba Bechtel entertained us with his stirring support of the "bubba" lifestyle. Further entertainment was available. Budweiser sponsored a party off site with music, dancing, beer and the works. I hate to say this, but we passed it up. We’re getting too old for partying especially after walking around the exhibit floor all day. 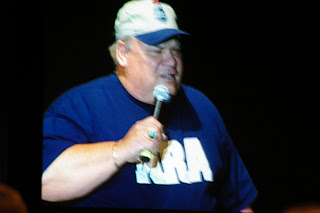 Speaking of exhibit floors, we finished touring the floor and schmoozing this morning. I’ve mentioned here that my "Holy Grail" dream gun, the one I doubt I will ever achieve, is a transferable Thompson sub-machine gun. Well, the Thompson Collector’s Society was out in force with an amazing display of these guns. They had models I’ve never even read about. The photo doesn’t come near to doing justice to their display. I talked to the collectors even while I tried mightily to control the drool reflex. 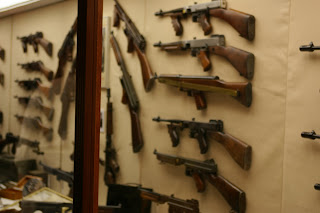 Many More Were Here

Well that’s it for now. Tomorrow we’re on the road so posting may be spotty depending on where we stay. Hard to believe another year is in the bag.
Posted by Denise was Here at 4/15/2007 10:17:00 PM