It’s been a busy day here at the NRA Convention. We’re decompressing in our hotel room before we go to the Members Banquet and talking about the day. We talked about our in-room breakfast, how my feet hurt (the are barking), and NRA stuff.

First thing, we attended the Annual Members Meeting. We’re both voting members so we had our credentials ready. Unfortunately, there’s not a lot of substance to vote for or against. The officers make most of the real decisions. Members have less say than I would prefer in a perfect world. On the other hand, with about four million members, no business would get done if everyone chimed in once a year. What can you do? 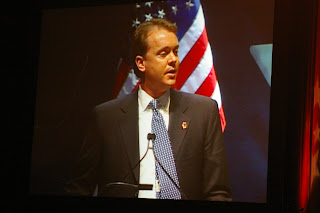 As usual, the oldest and younger life members were identified for special recognition.
Here’s Taylor, the youngest member this year. 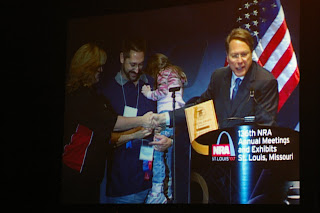 The election coordinator announced the results of the latest Board of Directors meeting. He mentioned the number of ballots that were sent out and then returned. Over 1.5 million ballots went to voting members and about 99,000 were returned and some of those were spoiled. Folks, that ain’t good. If you’re a voting member, get those ballots mailed back in, m’kay. Just saying.

We then hit the exhibit floor and roamed around most of the day. I believe there were more people than we saw in earlier conventions. An exhibitor we know told us that attendance might be about 62,000. I wouldn’t be surprised. 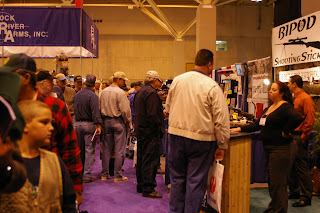 A Very Crowded Aisle-They all Were

We met Michael Bane of television's Shooting Gallery. We also met Bitter, Bitter Mom, and Sebastian who were also waiting to say hello to Michael. We enjoyed meeting all of them. In fact, Michael quipped that we had a gun blogger quorum.

We’re getting ready for the banquet. We’ll let you know how that goes. Bye for now.