It’s impossible to really talk about Walther P-38s without mentioning Lugers as you'll note when you read this post. You may want to glance at this "One From the Vault" about Lugers.

The German military knew they needed a new service pistol well before World War II. The Luger is a fine pistol, but it was too expensive to make in quantity. Its parts are machined from steel and then hand fitted. Further, it wasn’t really made for the muck and mud of a battlefield. Mud could jam in finely spaced parts (especially the partially exposed sear) and turn the pistol into a clumsy club.

The Germans faced a problem when it came to inventing new weapons. The Treaty of Versailles ending World War I forbade them from doing so. Well, secrecy is always an option and the German military commissioned research into a new design to be developed on the sly.

Walther created prototypes that eventually became the Walther-P38 (P-38 means pistol [pistollen in German] adopted in 1938). By 1938, secrecy was less of a concern and the pistol was adopted into service. 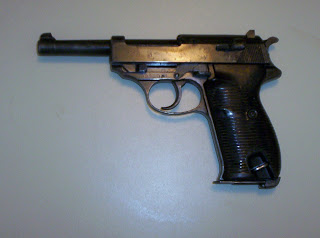 My Walther P-38 Made in 1943
Walther used some of its old concepts, but fielded a surprisingly modern design, much more so than the Luger that it officially replaced. The gun is double-action for one thing. You could chamber a round and then flip the safety decocking the hammer. (Given the state of Germany’s wartime production, I recommend that you don’t try this feature unless you’re at a range with the muzzle pointing in a safe direction.) The gun even has a loaded chamber indicator, something to cheer the heart of anti-gunners who think gadgets prevent all sorts of gun accidents.

Even though the pistol officially replaced the Luger, many officers continued to carry the older pistol. For some, it was tradition and for others it was due to wartime shortages.

Wartime Walther P-38s are marked with codes. The Army Weapons Office, the Heereswaffenamt, insisted that military goods should not be marked with the manufacturer’s name. The reasons include the Nazi penchant for not letting the left hand know what the right was doing. Also, there was some strategic value in disguising the maker so that allies wouldn't learn where goods were made and bomb the plants (they did anyway).

Walther developed the pistol, but they couldn’t keep up with wartime demand and licensed their patents and design. A few companies made P-38s although most were made by either Walther or Mauser. Heereswaffenamt codes for P38s include "ac" for Walther’s Zella-Mehlis plant, "byf" and "svw" for Mauser’s Oberndorf plant, and"cyq" for Mauser’s Spreewerke.

A few complete guns were made in Turkey ("mke") and in Czechoslovakia ("jvd"). Most Czech manufacturing, however, was limited to parts like barrels and FN (Fabrique Nationale) in Belgium, which made frames and slides.

The French assembled a few P-38s from captured parts after the allies liberated France. The total P-38 production for Germany was about 1,200,000 pistols. Production resumed in the 1950s originally for police weapons. Walther sold some in America and ended production in the 1990s.

Walther made my gun in 1943. It has all matching serial numbers and the appropriate proofmarks. The plastic grips with deep grooves were a wartime concept. They believed a gun so equipped would be easier to hold onto in mud than if it had wooden, checkered grips. I’ve never tested it—something about tossing my guns into mud hurts my collector’s heart. In case you're wondering, the magazine holds 8 rounds of 9mm Parabellum (aka 9mm Luger) ammunition.

My gun’s finish leaves a little to be desired, but that was standard in German production after 1941-42. By 1945, even metallurgical standards had eroded, so don’t trust safeties on any late war gun. In fact, use but don’t trust safeties at all—practice the four rules of safe gun handling.

I’ve fired the gun and it is very reliable and quite accurate. Its recoil is very manageable and is a joy to shoot. I guess maybe there is something about German engineering. P-38s are still available although I’ve noticed rising prices. They’re an interesting part of history.
Posted by Denise was Here at 2/15/2007 02:12:00 PM

For someone who would like to have an inexpensive version for shooting or even home defense, may want to consider the post-war P-1. A number have been released as police surplus. They have a alloy frame but many of the parts interchange. I got mine from Gander Mountain. It came with a surplus holster and spare mag. In fact my spare mag was marked P-38. Anyway its a real quality gun. Mine was made in 1977. Doesn't look it was hardly fired.
Badge0328 (Ret.)