Yosemite Sam (Bill) and I are gun nuts. We bear the name proudly. When both members of a marriage are gunnies, you know it's going to be a gunnie Christmas. And, it was.

I had mentioned in my last post that I bought Bill an SMLE for his Christmas present. Have you ever tried to wrap one of those things? I did and the results aren't pretty. Also, can you guess what's under the wrapping paper? 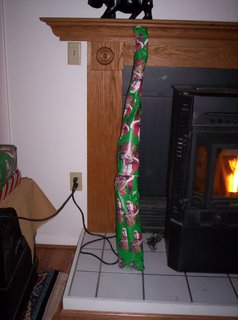 Here's Bill's new rifle. It came with the bayonet, although I didn't wrap it while attached to the rifle. Even my gun-nuttery has some bounds. The rifle's action and bolt are in extremely good condition--the best I've ever seen and I've seen a lot of them. The wood is in quite good condition as well.

As I mentioned previously, I had no idea what Bill planned to get me. There were no hints, questions, or cajoling. He had, however, seen me go "ga-ga" (the technical term for gun lust) over a small pistol. Friday night, he went to the gun store without me and bought it. I was floored when I opened the package. Am I a lucky woman or what? Now I feel my gift was too paltry. I may have to figure out ways to make up for that.

The pistol Bill gave me is in the following picture. It's a Colt 1911 Government Model Series 80 .380 pistol. It's a scaled down 1911 suitable for concealed carry. Its bore is pristine as is its finish. I've wanted one of these or a Colt Mustang and just never saw one when I had enough cash. Bill knew that and bought it for me. He amazes me sometimes. I put the cards in the picture, a regular size deck, in the picture for scale. As I told Bill, it's a baby Colt just hoping to grow up into a .45 1911. 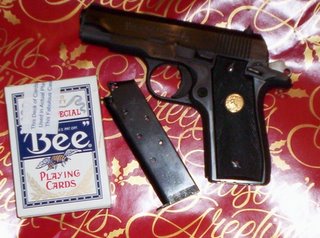 We had Christmas dinner--a ham and trimmings, called loved ones, and had a quiet day. That was our Christmas and we hope your Christmas was every bit as nice.
Posted by Denise was Here at 12/26/2005 01:49:00 PM