OWA Pocket Pistol
I’ve mentioned several times that I like mouse guns. I’m not saying they’re the best things for self-defense, but when you can’t carry anything else a mouse gun can’t be beat. I’d call a mouse gun anything that can fit into a jeans pocket without making your jeans fall to the ground (embarrassing and not to say slow on the draw). The OWA Pocket Pistol certainly fits that bill.

First a little history. Austria today is a quaint country that’s the end of Western Europe and the beginning of Eastern Europe. At one time though, Austria led a huge empire including the Czech and Slovak Republics, Hungary, most of what once was Yugoslavia.

World War I started when the heir to the Austrian throne was assassinated in Sarajevo. The Austro-Hungarian Empire, an ally of Germany, fared badly in the war and worse in the peace. It was carved up and its Imperial family sent packing. It was demilitarized and forced to pay war reparations although not as severe as Germany faced.

Of course an Empire has an arsenal and something had to be done with its gun makers. The Imperial arsenal was partially turned into a business called Oesterreichische Werke Anhalt or OWA.

OWA made a pocket pistol beginning in 1920 and exported an unknown number to the United States marking them "Made in Austria." In the first picture, you can see that the pistol is small. I can cover it with one hand. It’s 4 and 5/8" long and 3.5" high. At its thinnest, it is only a half-inch wide although the maximum width is 7/8". They stopped making them in or around 1926. 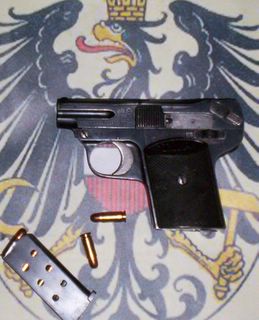 The pistol relies on the recoil to blowback the slide and chamber another round. It’s chambered in .25 ACP (or 6.35mm). It’s a technically fascinating gun.

Almost every thing about the pistol is backwards. It’s almost like its Austrian engineers found a technological backwater and steamed up it as fast as they could. As you can see, it has a tip up access to the bore: 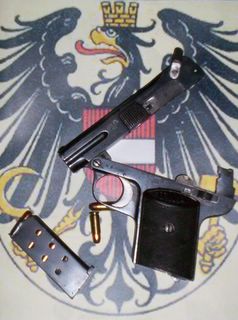 but, you can’t load it this way. It was advertised as an "easy to clean" feature and it’s easy to fieldstrip; I‘ll give that to those long-dead engineers.

In my final picture, you’ll notice another technological backwater. 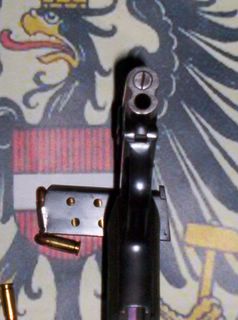 The recoil spring is located on top of the barrel. It’s right behind that little screw. And yes, you are looking down the bore. (Note: I took the picture with the action open and at no time did my head or hands cross the muzzle, although the camera was at slight risk.)

My particular gun is an early model and was probably made in 1922. It’s slab-sided above the trigger guard and the grip models are marked OWA with the umlaut (two dots above the O) outside the letter O. Most importantly my gun is marked "Patent Angemeldet" meaning "Patent being sought." Later versions had a notice stating it was "patented in civilized nations." Most of these guns had a jeweled slide, but mine is plain. I’m not sure if that was typical for an early gun or was done to cut the retail price.

My gun also bears Austrian proof marks. Ironically one mark is "NPv," which is found on Austrian-made Glocks today. An Austrian eagle is also stamped on the frame.

I haven’t shot this gun yet, but one day I will. I don’t trust the safety on it since it’s a mere hint of a hammer block. The rest of the gun is built as solid as a safe. The trigger-pull is heavy and Its sights are typical for pocket pistol of the day, that is, almost non-existent. I don’t expect much accuracy, but then it wasn’t built to be a target pistol.

For me, a mouse gun from the roaring Twenties suggests flappers and men wearing straw boaters. My OWA suggests the same things, but with a little Central European style and an interesting technology.
Posted by Denise was Here at 12/07/2005 06:12:00 PM