It's hard to maintain one's outrage at the stupidity of anti-gunnies on Christmas Eve. Also, news slows down and there's less blog fodder to be had. So, Yosemite Sam (Bill) and I at Ten Ring don't have any posts planned for the next couple of days--although if the muse should strike, we will write. We are planning on a gunnie Christmas though. Bill already knows what I bought him for Christmas. He's getting (got) an Enfield SMLE Mark III rifle. It has a virtually pristine bore and smooth action. It's a daisy all right.

I don't know what Bill is getting me. He's keeping it quiet this year. I don't know if it'll have anything to do with guns, but I'll try to smile anyway when he gives it to me. (Seriously, I do own and enjoy things other than guns and I'll love whatever he's found--except a lump of coal.)

When I saw Bill's new SMLE I found something I'm going to buy for myself as a Christmas/New Year's maybe even birthday present. I saw a small-ring Broomhandle Mauser complete with its wood stock that doubles as a holster. I already have a Broomhandle Bolo, but this was too nice a gun and too nice a deal to pass up. I probably would've passed on a Broomhandle without a stock, but I need a stock in my collection and why pass on the gun that goes with it. I'll get it off layaway in a few weeks and a "One From the Vault" will be forthcoming.

So, that's our Christmas plans. Bill and I wish you the best Christmas or Hanukkah ever. We leave you with this image from A Christmas Story and for you gunnies, may your gun-related Christmas dreams come true. 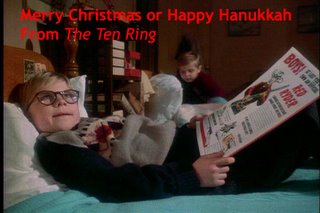