Because I’m discussing two Luger P08s made over twenty years apart, I suppose I should retitle my post “Two from the Vault,” but in the interest of consistency, I’ll keep it the way it is.

Lugers are interesting guns. They certainly have one of the most recognizable shapes of any pistol partly because of its unusual toggle-action (in the picture below one gun has an open toggle). A toggle is an almost Rube Goldberg invention of hinges, slides, grooves, and pins. It’s part of what makes Lugers unique and collectible. 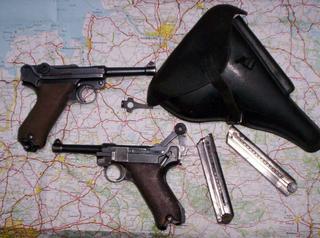 Lugers were invented in the early years of the 20th Century. Georg Luger invented his eponymous pistol, but he based on it a reworking of an earlier pistol, Borchardt Pistol C93. Hugo Borchardt’s pistol was the first commercially successful autoloader despite its bizarre design. Today, a Borchardt pistol in good condition sells for the price of many cars—way out of my collecting league.

Luger’s company, Loewe, asked him to redesign the Borchardt. After several tries he came up with what we can recognize as a Luger. His employers changed their company name to Deutsche Waffen und Munitionfabrik (DWM) and eventually earned Luger military contracts in Germany and Switzerland.

The German military adopted it in 1908 and gave it an official designation of P08 (Pistol 1908). It remained Germany’s sidearm until 1940 when the Walther P38 was named the official sidearm. Lugers were still made and issued to officers and other soldiers. In fact, public culture such as movies and books usually associate Lugers rather than P38s with German soldiers.

Mechanically Lugers are models of German engineering. There are almost 40 (depending on how you count them) finely machined parts. Workers machined the frame out of a solid block of steel and cut numerous grooves, holes, and channels. Lugers were expensive to make and required more than a little hand fitting to get them to work properly. That’s why most of its major parts have the last two digits of the serial number stamped on them. If an armorer had more than one gun disassembled on his bench he could identify parts by serial number and install them easily.

The complicated machining made the gun less than reliable for military use. The left side of the gun has a partially exposed sear. Dirt in this area can cause the gun to not fire. This exposed sear adds another strange fact about Lugers. If you cock the gun and then take the slide off the frame and press on a certain part of the sear, the firing pin will trip even though its trigger assembly is not connected to its slide. Here's one more reason to never leave a round chambered when working on or cleaning your guns.

Despite these flaws, the gun is reliable for target shooting and even home defense. Its distinctive grip shape makes it very pointable and comfortable when shooting. The toggle absorbs a certain amount of the recoil and it moves so fast that it’s not a distraction while aiming.

The upper gun was made in 1942 by Mauser. It doesn’t have the manufacturer’s name on it; instead it has a letter code “byf.” The Nazis valued never letting the right hand knowing what the left hand was doing. The Army Weapons Office, the Heereswaffenamt, assigned these and other codes. They also performed proofing and other tasks.

The Heereswaffenamt inspected guns and an inspector left proof marks on the right side of the frame. The proof marks at the time were three stick figures of the German eagle. Underneath it was a number assigned to an inspector. On my gun that number is 135. I have no idea who 135 was.

The Mauser plant that made my gun was in Oberndorf, which was given several codes such as S/42 (also seen on K98 rifles and byf was used on rifles too). Mauser used byf from 1941-1945.

During its production run (almost a half-century), Lugers had three different magazine types shown here. Original Luger magazine bases were carved from wood as seen in the picture. Makers later used plastic and aluminum (in the picture, the plastic base is in the upper gun and the aluminum is next to the holster). The bases, except for plastic ones, were numbered with the gun’s serial number and pistols were issued with two magazines, a holster, and a takedown tool. The spare magazine was also marked with a + sign showing it was the spare.

You can see the holster and takedown tool in the picture. Each is authentic. My aluminum magazine’s serial number doesn’t match my Luger. For collectors, that’s the only numbered part that doesn’t have to match because so many were separated from their guns (a gun with one or especially two matching magazines however does command a better price). All other part numbers match.

I’ve shot this gun and though mechanically accurate its trigger pull is too heavy (about 8 pounds) for really good shooting. Personally I have a problem with Lugers and other older guns because their front sights are just too narrow and their rear sights are mere notches. My fifty-year old eyes need more generous sight pictures. But, with care I can still line them up and find a ten ring or two.

My second gun, lower in the picture with the toggle open, is a 1920 police rework. Makers took WWI pistols and rebuilt them for issue to police officers. I am not sure when the frame was built. It was made and rebuilt by Deutsche Waffen und Munitionfabrik (DWM) and bears the maker's distinctive logo on the toggle. It has all matching serial numbers (except for the wooden magazine) and has some strawing left. It shows more holster wear than my byf-marked pistol, but is at least 22 years older.

It’s more fun to shoot than my other Luger because it has a better trigger with a four-pound pull. The sights are just as small though.

Those are my two Lugers. Lugers have attracted dedicated collectors because of the wide variation of types, makers, and marks. I don’t plan on acquiring any more, but you never know what may come down the pike.
Posted by Denise was Here at 10/05/2005 02:09:00 PM