Now That's a Gun! and Firefly/Serenity 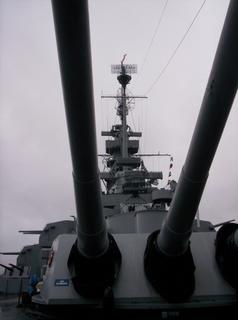 Sixteen-inch Guns of the USS Massachusetts
Bill and I managed to get away from it all over Columbus Day weekend despite rain every freaking day. Bill set our agenda which included a trip to Battleship Cove in Fall River, Massachusetts where we found the largest collection of historical naval hardware in the world (that's what they say, who am I to argue).

We climbed all over a World War II destroyer, a battleship (USS Massachusetts), submarine, Soviet missile cruiser, looked at PT boats, and other ships, boats, and planes. We saw some really big guns that make a dreaded .50 caliber single-shot bolt-action rifle look like a BB gun. 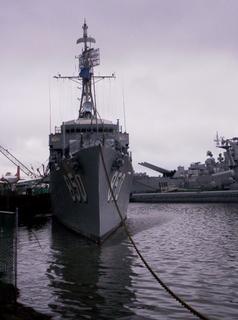 USS Joseph P. Kennedy
I found touring the ships a glance at a culture I respect, but never shared. Bill, who served in the Air Force, understands military life better than I do, but felt awed at the "floating city" aspect of a battleship. If you ever have a chance to visit Battleship Cove or other naval displays you should take it.

We did other fun things over the weekend including losing a little money at Foxwoods Casino (only a very little and only what we budgeted--I won half my budget back after losing most of it [is that a win or an incomplete loss?]), and a visit to Mystic Aquarium to say hello to Beluga whales, penquins, and other creatures.

We are now caught up in watching Firefly. We missed it when Fox briefly showed it and prematurely cancelled it. We heard about its phenomenal DVD sales. Then we saw trailers for Serenity, the movie that continues the series. We both like science fiction and thought we'd like to see it. When various bloggers discussed its libertarian and pro-gun aspects, we knew we had to see it, but wanted to watch the series first on DVD.

We've been trying to watch one or two episodes a night and plan to see the movie this weekend. We've really enjoyed Firefly so far and hope the movie is just as good. I like the futuristic yet familiar guns used on the series. We saw "Jaynestown" last night and one character had a sawed-off pump shotgun. He racked the slide, but when he pointed it one hears an electrical whine. It makes you wonder how they work.

The series is also full of freedom-loving, and self-defense supporting messages. I particularly liked one line (best of my recollection), "If someone tries to kill you, well you just try to kill him right back." Words to live by.
Posted by Denise was Here at 10/12/2005 09:42:00 AM