About two weeks ago Bill and I shot Mr. Completely's Postal Match #2, "Snub or Not." We used our .22 pistols to shoot the match. I shot a Sig Trailside and Bill used a Baikal. We did okay and found it a lot easier than his "Flyswatter" match. While easier, it was still a challenge. 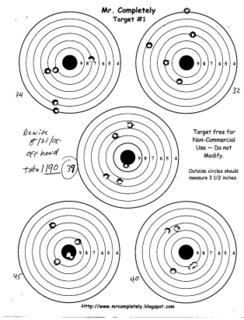 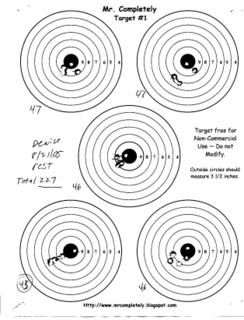 Denise's Target With a Rest

I'm a little disappointed with my scores. I can do better. I got sloppy with my first two targets. When I took a squinty-eyed look at them from the firing line, I realized I needed to concentrate more and did better. My rest target was okay.

Bill ("Yosemite Sam") also shot this challenge. He did pretty good, although I still beat him. To his credit, Bill shot the match with one hand in the classic target pistol style. He did 176 unsupported and 193 from a rest for a total of 369. His targets are below. 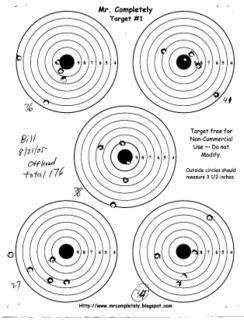 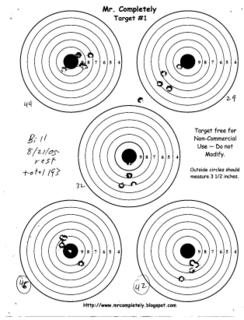 Bill's Target With a Rest

We enjoyed shooting the match and are looking forward to Mr. Completely's next torture challenge. We were slow to post our targets because we had planned on shooting with our snub guns, but never got to the range to do it.
Posted by Denise was Here at 9/06/2005 12:40:00 PM