Well, last Saturday Bill and i finally got out to a shooting range. We shot Mr. Completely's Flyswatter pistol challenge. I don't mind telling you it was a royal pain-in-the-neck challenge. Bill and I followed Mr. Completely's rules to the letter. But, I think if I could have shot five or six more targets I would've got the knack, but that would be cheating. Without further ado, here is my Flyswatter target. My swatted flies are circled. 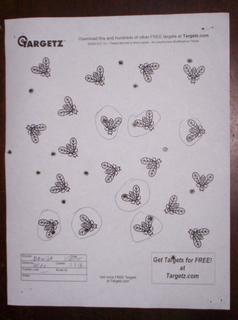 This is the second of the two allowed targets. I got three on the first one, and on this one I managed to swat seven of the miserable things. It's a lot harder than it looks.

For one thing, the target is on 8.5" x 11" paper. Let me tell you at ten yards these little flies are hard to see with fifty year old eyes. Also, as you can see, the flies aren't lined up in a nice little row. You can't just move the gun over, you have to move it up or down as well. When I shot the first target I made the mistake of going too fast and not moving the gun quite right.

I had a couple of throwers and a couple of near misses, but given the complexity of the task, I'm pleased I swatted seven. I used my semi-automatic Sig Trailside in .22 long rifle firing CCI Standard Velocity ammo.