Model 1903s are clean looking guns--they’re slab-sided and well designed. Colt introduced it in .32 ACP, but military officers wanted a harder hitting round and Colt came out with a .380 ACP version in 1908. General George S. Patton carried one. While he carried his signature Colts in his gun belt, he kept a Pocket Pistol in his waistband.

Model 1903s live up to their name: “Pocket Pistols.” They're quite concealable in a jacket pocket or even a deep pants pocket. I don’t carry mine because I have newer guns for that purpose, but it would be cinch to carry. It’s flat, it weighs a little less than a pound and a half and there’s nothing to catch on clothing. There’s no hammer, no protruding safety, no slide release, and no take-down lever. Like I said, it’s a remarkably clean and neat design.

These guns have two safeties. One is a slide lock safety that can only be engaged when the gun is cocked. It locks up the trigger assembly. The other is a grip safety. There’s no magazine disconnect, at least in my gun. The magazine release is a butt toggle—European style.

Here is a photo so you’ll know what I mean (I’m trying to improve my photographs here so bear with me). 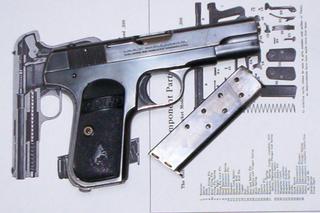 You’ll note in the picture that the magazine’s top is left “in the white.” Colt typically didn't blue magazine tops. I’m sure they had a good reason, but I don’t know what that might be. I’ll take a non-authoritative guess so don’t quote me. Colt engineers might have thought that an unblued magazine top would slide home with less friction.

My gun is the original .32 ACP model. I’ve shot it and it’s surprisingly accurate. The sights are small consisting of a thumbnail style front sight and a notch rear sight. You have to take your time and line up the sights exactly right. My gun tended to shoot to the right so I had to aim about 8 o’clock on the target. Once I did that, I was hitting the ten ring all the time. When I dry-fired it with a snap cap, I noticed that I was pulling it a little to the right. It must be a quirk of how the gun fits my hand.

I had no failure to feeds, no failures to eject, and no failures of any kind. Not bad for a gun that was designed over 100 years ago. It’s a testament to Colt’s engineers, and craftsmen. And, lest we forget, the inventor of Model 1903s is none other than John Moses Browning, a true genius and one must speak of him in hushed tones. If you're really interested here is the patent for Model 1903.

Speaking of testaments, the finish is wonderful. Before World War II, Colt developed a bluing process that is simply beautiful. Take a good look at the picture. The blue is almost black and so deep your reflection can swim in it.

While Browning hit a home run with this gun, his disassembly design is not intuitive. You might note a little arrow and line near the muzzle. After removing the magazine, you hold the gun a certain way, stick your tongue out of your mouth at just the right angle, pull the slide back so that the line aligns with the frame, and turn the barrel to the left. If everything is perfectly in line, you’ll be able to pull the slide off and clean your gun.

My gun has some finish wear on the edges, along the front of the grip, and the grip safety. It’s rifling is sharp and clear and overall a nice gun. Based on the serial number, 36xxxx, it was made in 1920. I can imagine F. Scott Fitzgerald or one of his contemporaries ambling into a hardware or department store. The deep blue of a well-designed Pocket Pistol catches his eye. He must buy it and carries it from the store in his coat pocket.

In my mind’s eye, I can see that store’s gun display. There’s a couple of 1911s that soldiers brought home from World War I. The oak case holds other handguns. A few shotguns, and a handful of rifles line the wall behind the counter. For a discriminating customer, there’s a Thompson submachine gun. Paperwork consists of passing cash across the counter and then wrapping your purchase in day-old newspaper. Like its little brother, the Vest Pocket Pistol, my gun comes from a different, simpler and more civilized time.