Yosemite Sam and I had a busy Memorial Day weekend. We finally got a dog. Given that we hunt, you might think our new addition would be a Labrador, Golden Retriever, or other mighty hunting dog. Instead, we fell in love with a Bassett Hound.

All is not lost in the hunting fields. Bassetts have the second best scenting abilities second only to boodhounds. They were bred to follow game beneath briars and other low plants. We're not going to hunt with him because we got him as a pet. We realized that we simply didn't have time to train and finish a hunting dog. Just not in the cards with work and commuting. 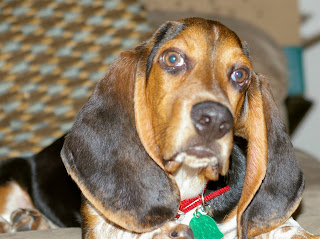 So, our hound will be Ten Ring's official mascot. I promise that we won't be doing too much dog blogging. Just one thing though, his name is Cooper. We wanted to name him after a gunnie and thought of the late Colonel Cooper, but also John Moses Browning, Oliver Winchester, Samuel Colt and others. We made up our minds when we checked Cooper's papers and saw that his sire was named "Oakhaven's Crazy Cooper." Serendipity made up our minds.