Today is National Ammo Day--one day of the year when gunnies stage a buycott of ammo. Each year, more gunnies adopt ammo day as a day to add to our supplies, to raise awareness of the shooting sports, and to support our local gun dealers.

This year, several bloggers and forums added a twist and said to buy ammo at Wal-Mart. They even added a certain time. Their arguments convinced me and I decided to buy ammo at our nearest Wal-Mart and at our favorite gun store. We hope to raise a spike in Wal-Mart's sales records and convince them that we are an excellent market that they better make happy.

Here are our purchases: 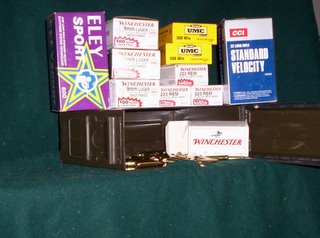 At our local gun shop, State Line in Mason, NH, we bought two boxes of .308 Winchester and two bricks of .22 long rifle ammo--one is CCI Standard Velocity and the other is Eley Sport. Eley makes the best target ammunition in the world, and they have a line of inexpensive practice rounds. National Ammo Day gives me an excuse to try it out. That's a sub-total of 1,040 rounds and a grand total of 1,500 rounds.

We hope your Ammo Days were at least as productive and we hope you have a lot of good, safe fun using up those brand new cartridges.
Posted by Denise was Here at 11/19/2005 08:07:00 PM