This, That, and the Other

I admit I haven’t been living up to my blogligations. I can sum it up in one word (or is it two) Burnout. I have said so much about guns in long essays, short posts, musings, range reports, Ones From the Vault, that I've said everything that I've ever thought about guns.

I've supported gun rights and the battle continues seemingly with no change. The anti-gunnies are lying while the pro-gunnies are slinging facts, but to little avail. Anti-gunnies have done an excellent job demonizing guns. Too many of our fellow citizens think a gun is too dangerous to own, too complicated to use, and too evil to touch.

Still, I see a lot of hope for gunnies. We have been winning battles, although we may need to continue fighting forever. Things are not as good as they were while I was growing up, but they’ve improved in the last fifteen years or so. I doubt we’ll ever restore gun rights to pre-1968 or 1934, but we’ve held our own and made some advances.

I’ve said all of this before in so many ways here on Ten Ring. I plan to continue to blog about guns after my recent breather, but I may throw in a few non-gun posts to liven things up (that is, to clear my head). Here’s a few facts about me to show I'm not just a gunnie:

I collect first editions of modern literature; the collecting field is called “Modern Firsts.” The Internet has made collecting harder. Bookstore and thrift shop owners have learned that a first edition can be worth a pretty penny. They might not be able to sell it for its full catalog price locally, but they can sell it on the Internet for that price and sometimes more.

I buy gold on occasion in the form of small coins--mainly Canadian Maple Leafs. I think gold’s a good investment because it’s always liquid, it’s never had no value, it’s portable. I don’t buy it as a TEOTAWAKI investment, although it wouldn’t be bad to have if zombies attacked, asteroids fell, or whatever else hits. Also, I’m such a girly-girl that the stuff is just too damn pretty to resist.

For my career or to attend graduate school, I have lived in (no particular order) Maryland, Idaho, Florida, Massachusetts, Texas, and New Hampshire. I have visited all but one of the lower 48 states (Minnesota), but have never been to Alaska or Hawaii. I would love to visit Alaska, but I’m not too interested in Hawaii.

Also, I don’t like Glocks or most other polymer guns. There’s nothing wrong with them in particular. I just prefer wood grips, blued metal, and a gun that feels good in my hand. I know there are many who swear by Glocks and that’s okay too. Each to their own. (Whoops this wasn’t a gun post, ignore this paragraph.)

Finally, we have mentioned our new addition, Cooper the Basset Hound puppy. He’s getting bigger all the time. He’s a really good natured, sweet dog. We didn’t mention that we found out he had pneumonia probably from the breeder’s kennels. We nursed him back to health with enough antibiotics to kill a jumbo jet full of pathogens. We spent a lot of money at the vet’s office, but he’s our dog, which means he’s our best friend. And here he is: 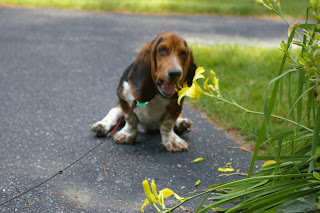