There has been blog-talk about ATF's release (other links in that post as well) of firarms trace data. I don't have the statistical background to crunch the numbers or offer any real insight.

I did notice on thing about one of the ATF's graphics. They showed the types of traced guns in a bar graph. They broke types of guns into distinct categories: pistols, revolvers, rifles, shotguns, derringers, machine guns, unknown types, and combination. On the top of each bar for a primary type was a silhouette of that type gun.

The silhouette for machine gun was an M-16 rifle (with the old-style handguard). A true M-16 is certainly a machine gun, but the silhouette could be just as easily interpreted as a civilian AR-15. 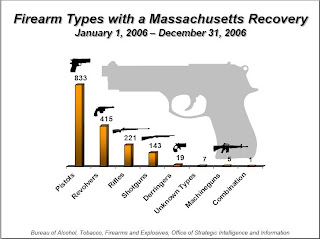 I don't accuse the ATF of doing this on purpose, but it shows how easily semi-automatics are demonized in the public eye. They could of used the graphic of a Thompson (there is a semi-auto version, but it is not as common as AR-15s). Better yet, they could have shown a tripod mounted gun. But they used a silhouette of one of the most popular civilian rifles.

The public is confused enough between fully automatic and semi-automatic guns. This graphic won't help.
Posted by Denise was Here at 8/24/2007 08:02:00 AM