My co-workers know I own guns. Several of them have said that they believe any gun owner could go off the deep end and go on a shooting spree and hope I don’t do it. Needless to say, I never talk about attending my bullseye league with them, going to a gun show or store, or going trap/skeet/sporting clay shooting. Occasionally, they’ll ask me about a gun-related subject generally about a gang-banger shooting in Boston. It leads to a few silences around the ole water cooler.

I don’t share an important part of my life with most of my co-workers. There are a couple of exceptions—one person even went to the range with me once. But, my moonbat co-workers don’t seem to have any compunction with telling me all about their beliefs. They've made comments about NRA that’d make a sailor blush. I’ve overheard insults against Bush, praise for Cindy Sheehan, and the word Rethuglican more times than I can count (I’m not a Republican and I’m no longer a Democrat, but name-calling is beyond the pale).

I’ll never change their minds. Basically, I’ve quit trying to talk politics and gun rights with these bigots. Each to their own, I say.

There’s one thing though that I’ll never understand. It deals with 9/11 and has been brought up by an upcoming movie, “United 93,” about the passengers who tried to take over the hijacked flight and died in Pennsylvania. They probably saved the White House or the Capitol Building. 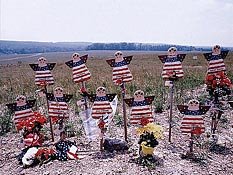 I mentioned to one person that I’d like to see the movie. Of course, that person told one of the moonbats who told me that the movie would never show the truth of United Flight 93. She went on the usual tirade; cell phones couldn’t have been used, that it must have been shot down and Bush won’t admit it, that the people on board weren’t heroes, that it’s all part of a conspriacy.

I think she stopped talking when she saw my face turning red. I told her that the people on Flight 93 are my personal heroes and I named Jeremy Glick, Mark Bingham, and Todd Beamer. Someone else gave an opinion that floored me and that gives a whole new definition to moonbattery. She felt it was sad that those passengers died while fighting. She thought they should have sat quietly and reflected on their lives and that struggling cheated them of their final moments of peace.

Most of my co-workers have a typical big city attitude and are avowed progressives. They think that if we just talk things out and understand each other we’ll all get along. Maybe these folks have become too civilized. Maybe they’ve become too insular. They don't understand that some things are worth fighting for and there're people out there that must be fought.