Today is BAG Day and it’s time to share my purchases with my small corner of the blogosphere. It was only a month ago that I was crying about not knowing what I would get for BAG (Buy a Gun Day). Then I mentioned that I had focused my thoughts on two guns, a coach gun and Walther P-22. Finally, I reported on buying a coach gun and the very next weekend I found a gun in a gun show that had to go home with me, a Japanese Nambu.

First though a word about BAG Day. Aaron of Aarons.cc started it, but his site was hacked recently and is thoroughly down, so no linky. It’s a simple idea. Every April 15 our government demands that we pay our taxes or go to jail. Many of us pay too much in withholding taxes and get a refund that represents only a fraction of what we paid that year. Buying guns is a way of putting that refund to good use while maintaining an armed citizenry. Even if you don’t get a refund, the latter is not a bad reason to buy a gun.

I collect guns and don’t need a reason to buy one, but I also believe that the best way to protect our firearm rights is for a non-gunnie to buy a gun. That doesn’t mean a new gun owner becomes a “gunnie” immediately, but now he or she has a stake in gun ownership. His or her gun represents one more gun that gun banners would have to steal if they ever get their way. I use BAG Day not to acquire a new gun, but to express my passion for owning guns and my desire for a non-gunnie to join in.

Without any further ado here is my first BAG Day gun for 2006. I actually bought it on April 1, but I used my tax refund, so it counts for BAG Day.

A Gently Used Coach Gun
It is a Baikal Bounty Hunter II. I love the color of the stock and the way it contrasts with the lockwork and the butt plate.

A fine example of Russian workmanship
It was used. Baikal is no longer sold here under that name. Remington imports them under the Spartan brand. One of these days, I’ll use it when I give Cowboy Action Shooting a whirl.

I ended up with a second BAG Day purchase. This Nambu spoke to me at a gun show and I answered its call. 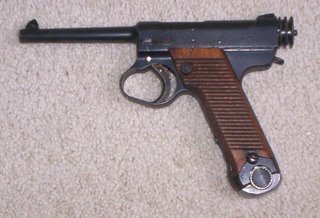 Nambu Type 14 Pistol
It is a great addition to my World War II gun collection. I will cover it in a “One From the Vault” soon.