A Visit to a Gun Show (in Massachusetts)

Bill and I attended a gun show in Wilmington, Massachusetts yesterday. It was held in the Shriner Auditorium and sponsored by American Express Financial Services. I didn’t know American Express was into guns. One could stop and talk to their representatives about finances. Hmmm…maybe they realize that people who buy and shoot guns have disposable income.

We got to the show about 1:00; yeah we were running a little late. Trying to get Bill and me out of door on Saturday morning takes dynamite or at least a charge of blasting powder. We finally got out and drove into the People’s Republic Commonwealth of Massachusetts. We made sure we brought a bag and rifle case with locks just in case we bought a handgun or long gun. More on this lock business later.

When we arrived we had to park a bit of away from the building. Shriners “provosts” in orange vests conducted people to parking spaces. They had filled their rather large parking lot and cars were spilling onto the streets and into parking lots of closed businesses. Massachusetts is full of gun-fearing wussies, liberal gun-grabbers, pacifists, and PETA huggers. Couldn’t prove it by this show's attendance.

You see Wilmington is inside Interstate 495 and outside Interstate 95/128, both are “ring roads” around Boston. These roads are important political markers. Boston and its immediate suburbs are inside 95/128 and people here basically run the state. People living between 495 and 95/128 are a mix of conservatives and liberals. Once you get outside 495, you are hard pressed to find a gun grabber. You might find Democrats, but few will be of the anti-gun persuasion.

The show offered 500 tables. Concrete floors are hard on my feet, but the guns made up for achy feet. Let me give you a brief sample: an Allyn Conversion Trapdoor Springfield, a Broomhandle Mauser, a deeply-engraved Broomhandle Mauser carbine (here is a photo of an unengraved one) for $9,995.00, more Mosin-Nagants than you can shake a stick at. Oh oh, Bill says I need to stop talking about historical stuff. Okay, they had modern revolvers, shotguns (like a nicely priced Stoeger Ducks Unlimited Over/Under), and everything else you can think of.

Ammunition prices were too good to pass up and we didn’t. We bought a little beef jerky, and I finally added something to my collection (I’ve been on a bit of a moratorium). I’ve wanted a Nagant M1895 revolver for a while, but it had to be priced just right, be in decent condition, and have matching serial numbers. I found one for $100.00 with holster. Not the best made gun in the world, but it fills a hole in my military handguns collection and now my Mosin-Nagant carbine has company. I could buy this handgun in another state without running afoul of any Federal laws thanks to my Curio and Relics license. Here is a photo of our new addition. 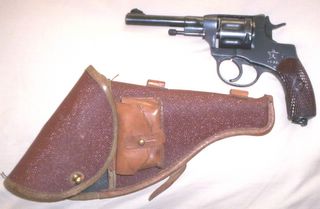 Finally the lock business. Massachusetts has a law that every firearm must be sold with a trigger lock. Since I bought the gun from a non-Massachusetts dealer, they didn’t throw in a lock. One of Wilmington’s finest checked guns on the way out to make sure you really bought your new gun and were not taking a five-finger discount. He also gave us a Project Childsafe cable lock. He reminded us to put it on the gun before we put in the car’s trunk (yes, we will big brother—he was pleasant enough, but you knew not to argue with him). I told him we had a lockable bag and he gave me a thumbs up.

You see, in Massachusetts a gun must be unloaded and in a locked container or in a locked trunk. Massachusetts' law is so arcane and detailed you may also be required to have a gun lock on it if the gun is in a trunk. I am not a lawyer, but better safe than sorry, so Bill and I always bring locked containers to these things. Keep it in mind if you ever transport guns in this state.

So that was a major part of our weekend. Sorry to be such a bore about visiting gun shops and gun shows, but we are gun nuts you know. By the way, anyone need a brand new, never been used, Project Childsafe lock?
Posted by Denise was Here at 2/20/2005 08:32:00 AM

If you have a mass class a license to carry with no restrictions, no trigger lock is required for transport. Thanx