A convention of celebrities

Here we are in Pittsburgh and after a quick stop to the NRA store to get our T-shirts and mugs before the best stuff sold out we hit the exhibit floor. . . 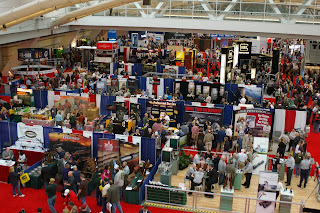 and wow it was crowded! Even taking into account the people attending the Leadership Seminar, who like to listen to politicians drone on, there was still a sea of humanity to fight to get at the free tote bags and to gawk at semi-famous people. Then there was the problem of fighting through the ginormous lines of people who for some reason wanted to pay ridiculous amounts of money to buy crappy hot dogs and hamburgers. One common factor in the 7 conventions I've attended has been the god-awful overpriced food on the convention floor.

One unusual thing about today was that wherever we turned we ran into a celebrity. 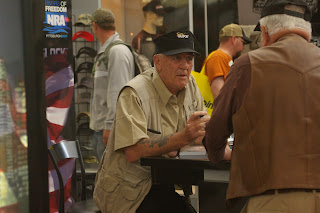 Here is the Nuge: 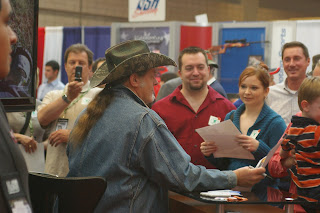 No surprise there. R Lee Ermey and the Nuge are at every convention

But we turned the corner and what do we see at the Thompson-Kahr booth. The incompetent gold miners from Gold Rush Alaska: Jack and Todd Hoffman. I think they may have tapped a vein of "gold" that will never play out. Maybe they aren't so incompetent after all. 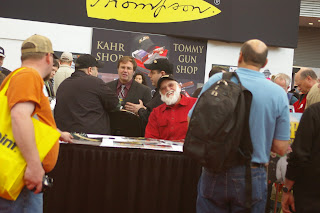 Denise also ran into Chris Reed from Season 2 of Top Shot. Unfortunately I was not able to get a picture. The NRA convention seems to be really popular with the reality show set this year.

Finally we have Hero to all supporters of the Right to Keep and Bear Arms, Dick Heller: 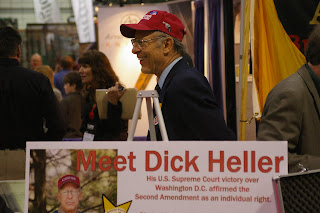 We spent a couple of hours of wading through the exhibit area and saw a lot of gunny goodness. But then we found out there was another entire floor of exhibits downstairs! We only had the stamina for a couple of rows but we ran into this strange exhibit: 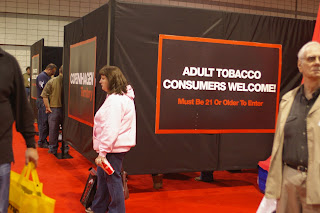 Now, I have never had the desire to use chewing tobacco, but I have to admit that I have the urge to show my ID and enter into this shrouded domain. Yes, they require an ID to enter. It all seems so naughty, like the darkened adult store at the end of the block that you have to screw up your courage to enter. I never thought I would see the day when chewing tobacco was something to be hidden and whispered about and guns would be cool and openly displayed for all to see. Strange times.