One of our "must sees" on our vacation was NRA's Whittington Center nestled in the mountains outside of Raton, New Mexico. If you look for it on a map, you'll find it in New Mexico's northeast corner not far from Colorado. We stayed in one of the smaller and rustic cabins on the grounds.

We arrived a little late, but shooting hours are from sun up to sun down. We had plenty of time to burn powder. More about that later.

The Whittington Center is one of America's premier shooting facilities. It boasts 17 ranges for a number of disciplines--rifle, shotgun, and handgun. Some of the ranges close depending on weather or other reasons, but enough were open for us to enjoy an afternoon of shooting. There is also a gift shop, museum, and offices. A few people are lucky enough to live on the grounds. There are no restaurants, so you either bring food or drive four miles to Raton.

The museum is new and worth a stroll. It features many guns and puts them into context with shooting sports. The center also sponsors guided hunts and other activities. By the way, they sell ammo there--no 9mm or .380 to be found.

We must be rain magnets or something, because it rained there and the gate keeper couldn't remember the last time it had rained. And here is the gate: 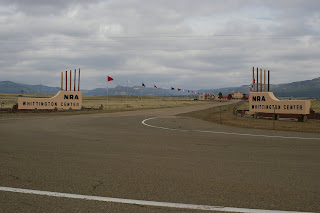 We checked in and put a few things in the cabin. They don't allow dogs in any of the buildings, so Cooper stayed in the pickup which we drove to the ranges. Most of the pistol ranges were closed, but the Hunter's Pistol Silhouette range was open.

We had never shot silhouette of any kind before and we had a blast. Another couple were shooting at the steel chickens, so we elected to shoot at steel pigs. We didn't attempt to follow any of the rules (shoot from left to right, or keep score, etc.), we just tried to knock the piggies off their steel pedestals.

We used handguns--a 9mm Smith & Wesson for me and for Yosemite his Colt .45 acp. It was a challenge. Yosemite Sam is trying for bacon: 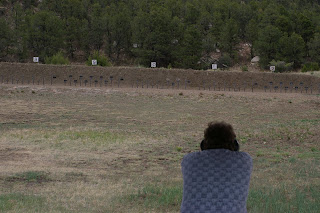 If you're curious, the pigs are 50 yards away. I wish to say that we knocked them down in short order. Nope, we used much hard to find ammo, but we did send a goodly number of the nefarious steel piggies into the dirt. Challenging, but we had a ball. Now, we want to find a nearby silhouette range (any input is welcome, as always).
We packed up and drove to the "sight in" range, which is the paper on racks-type rifle range. We had brought a couple of rifles, my M1 Garand, and Yosemite Sam's 7mm Rem Mag. When we got out of the pickup, we scared a herd of antelope that were grazing on the end berm. They knew it was no longer a good place for them. For me, the antelope is the mascot of the Whittington Center. They're all over the place. 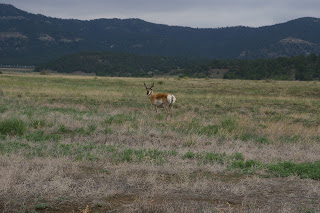 We shot for awhile, but it was cold there. A damp wind had come up and we broke out our jackets. The brisk wind carried rain and it was in the low 40s. Weather like this, in New Mexico in late May! A founder's cabin under glowering skies. 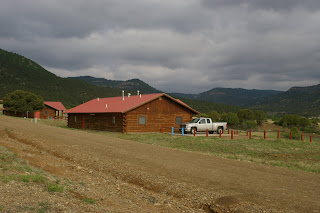 We didn't shoot the next day, but moved on to new places. If you ever have a chance to get to the center, go. Plan an entire day of shooting. Plan a family get-together, a vacation, a "business" trip, or invent any other reason. Just get there and have fun. If you need any more reasons, here's a picture of their 1,000 yard range as seen from our cabin. 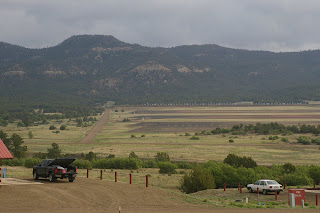 Thank you for wwriting this