I'm already tired of winter and it doesn't begin officially until tomorrow. I already feel hemmed in and just not wanting to deal with slick streets, slippery sidewalks, digging snow off the car, and the thousand and one things you have to do when you are living in New England.

New Hampshire, where I live, is a gunnie paradise, but the weather sucks. I keep wondering if I can move to other places with good gun laws and good weather. So far, my career won't allow it. Perhaps after Heller/Parker, if the decision goes our way and is far-reaching enough (dream on), I could stop having to choose places to live based on laws that curtail a constitutionally guaranteed freedom. Not yet, but perhaps.

That's one of the many things unfair with the gun laws. One state will curtail your rights, but drive across the border and there is no curtailment. I'm all for federalism, but there are just some things that are fundamental and owning a firearm, or choosing not to do so, is one of them.

I am working at home today trying to get a giant project off my desk. There's a snowstorm going on right now and I am glad I had the option to work here. I used my Treo's camera to snap a picture of the snow. My car is the one that is parked in front of the two vans. Yes, it's a lump of snow.

We're being socked this year and it's been cold. Needless to say, Yosemite Sam and I are not doing any trap shooting like we did last December. See you all later. 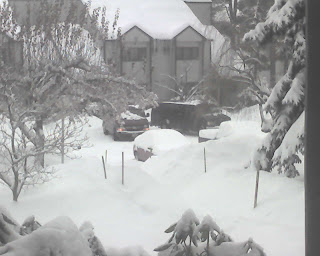