I haven't written much here recently about getting out and shooting. Truth is Yosemite Sam and I just haven't been out much due to work and other demands. Still, we did get to the range last weekend and shot a number of guns and truly burned some powder.

I decided to shoot the "Circle" e-postal match that The Conservative UAW Guy is sponsoring. Until last year, I shoot a lot of bullseye pistol matches. I had to take a hiatus because my gun club is refurbishing the indoor range. That doesn't mean that I don't practice though. The "Circles" match's rules include one target shot offhand (one hand--just like in formal bullseye shooting). The other target can be shot either offhand or with both hands. I was enthusiastic about this match.

I shot my first target with a .45 Long Colt cowboy-type pistol. I was disappointed in the results. I discovered the gun that I thought was fairly accurate shoots to the left. Hmmm...nothing like having a different target to force one to discover certain unpleasant truths. No one will ever see that target (shudder).

I got out my bullseye pistol, that I featured here. I resighted it in for the 25 feet the rules required and shot a target. I did great on that one. But, I found out it was beginner's luck, at least for the Circles target. Let's roll that footage: 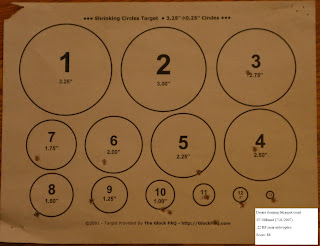 As you can see, I had a couple of throwers, but most hit home. I hit the edge of the smallest circle (13 points), but I have a little secret: I wasn't aiming at it. I was aiming at the bottom of the #4 ring and accidentally hit the 13 ring. I stared at it through my spotting scope and couldn't believe it. Knock me over with a feather. I got a total score of 88 out of a possible 91. I used a strategy of shooting the #8 ring first and then slightly raising my aim to hit the #7, then the #9 then #6 and so forth.

I then got humbled. I shot the next target with both hands and found the gun's grips don't really lend themselves to that practice. I managed to eke out a 56 on that target and here it is: 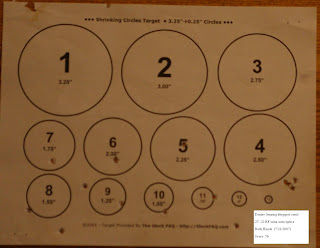 For the life of me, I couldn't even hit the #4 ring and sent a cluster of bullets next to it. Of course, I thought I could do better and took the last circle target I brought and tried in offhand. No improvement over 56. Thus I got a total of 144 for the match.

Shooting these e-postal matches is a useful practice. The targets take you out of your comfort zone and force you to try something new. If you haven't tried one, give it a whirl.
Posted by Denise was Here at 7/25/2007 10:12:00 AM