Albion Number 2, Mark 1**
I posted my most recent "One From the Vault" last June. It doesn’t seem that long. In fact, I would’ve sworn I did one just the other month. Its true: as you get older time accelerates. Each day seems to flicker by and weeks seem like days. Oh well such is life.

I collect guns mainly from World War II and earlier. I can’t afford many nineteenth century guns, but I can still find bargains on twentieth century war-horses. For instance, the British World War II service revolver can be found as low as $250.00 (and yes you can find them for more too). Most of these guns are still functional and reliable.

This "One From the Vault features an Albion Number 2, Mark 1** revolver. It has an interesting production history if you don’t mind such details. The British military establishment believed it needed to replace the venerable Webley Mark VI revolver chambered in a manly .455 (even though it had a slightly wimpy load).

For whatever reason, the generals and their civilian cohorts thought their soldiers and officers would appreciate a lighter gun with a smaller, less powerful round. They had taken to heart complaints that the old Webley was too heavy (it does weigh over two pounds) and too large (it’s about a foot long). The generals thought extensively and chose a .38/200 cartridge for designers to build a much smaller and lighter revolver around. This is not a very effective cartridge, so I bet those complainers wished they’d kept their mouths shut.

The .38/200 is a British designation for a .38 caliber bullet weighing 200 grains. It was a heavy bullet for a revolver and you would think that its designers would have put a lot of gunpowder in its case. No, the case is basically the same one Smith & Wesson invented in the 1870s only it sported a 148-grain bullet. You can easily fire .38 S&W cartridges in the British revolver; however, the .38 S&W is not the more famous .38 Special. The former is only about 2/3rds the size of the latter.

Once the British military decided on a caliber, they asked manufacturers to submit drawings and prototypes. Webley & Scott scaled down the Mark VI and submitted the new design. Their competitor, Enfield, submitted their own version of the revolver. It looked just like the Webley entrant, but had slightly different internal lockwork. 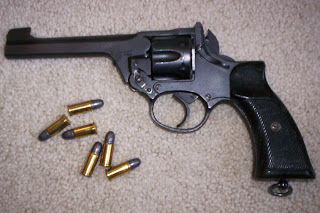 Albion Number 2, Mark 1** (Click for larger size)
The British government, in their infinite wisdom, chose the Enfield submission—let’s not forget that Enfield was the Royal Small Arms Factory. Webley & Scott blustered about patent infringements, but little came of it. The British military called the new gun the Enfield Number 2, Mark 1 and production began in 1932. World War II was just seven years away.
Enfield ran into a few problems. Tank crews were armed with Enfield revolvers, but if they had to get out of a tank quickly, the hammer could catch on the tank’s hatch. Enfield bobbed the hammer making the gun effectively double action only (no hammer spur, no cocking for a more accurate single shot). The revolver was also cheaper to make this way, which may have been more important than tank crew complaints. The Enfield Number 2, Mark 1* was born.

Because the gun could only be fired double-action, there was a problem with accuracy. The trigger pull had always been heavy so Enfield replaced the main spring with a weaker one. Wartime production called for cutting corners and factories stopping installing transfer bars. This means the gun (unless arsenals added a transfer bar in post-war refits) can fire if dropped. Thus the Enfield Number 2, Mark I** was born.

Enfield faced another common wartime problem. They couldn’t keep up with demand. They licensed the Mark1** design to Albion Motors a Scottish car company. Albion sublet production later to Coventry Gauge and Tool. A company in Australia produced a handful of revolvers under Enfield’s license.

Ironically, the British military issued Webley & Scott a contract to produce their version of the gun and Webley called it the Mark IV.

My gun is an Albion Number 2, Mark I** made in 1943. It has all matching serial numbers and no transfer bar. I’ve ran a few .38 S&W cartridges through it and it works fine. It’s not accurate. The hard, long trigger pull is not conducive to any decent trigger control or good sight alignment. I would not call the cartridge a man-stopper by any means. A 200-grain bullet might hit a little harder, but even then I have my doubts about its effectiveness.

The gun itself is reliable. It’s a top-break action and the spent cases pop right out for speedy reloading. It was slightly rusty when I bought it, but a little Breakfree and elbow grease with a brass brush took it right off.