And a good time was had by all. Oh, you want more details. Okay, the things I do for Ten Ring readers. (Note: I took several pictures, but only one came out. Sorry.)

NRA’s Banquet is a highlight of any convention. There is no business to conduct, only speechifying and entertainment. Last night was no exception. The banquet was held in the Midwest Airlines Center where a cash bar was available if you had the fortitude to wade through a sea of people.

In the banquet room were 242 round tables with places for twelve people each. Almost all the tables were full. I’ll let you do the math. We got an aisle seat near the middle of the room, not bad, but not good. I guess that’s what being in the middle is all about.

Everyone put on the feedbag and consumed salad and something called Herb Crusted Tenderloin of Beef nestled next to a Breast of Chicken Pesto Parmesan Beurre Blanc. Believe me, the names are bigger than the portions. Yet with dessert, I didn’t go away hungry.

We watched NRA present Senator Larry Craig of Idaho with an award for getting the lawsuit liability law passed. We listened to a speech from retired General Tommy Franks.

That man can talk and is a natural at getting people to laugh while still giving a serious message. I actually enjoyed his speech. He used a lapel mike rather than the podium which leaves him free to move around the stage and engage the audience better. I guess talking to troops is good practice for talking to a bunch of NRA folks. He was presented with a hand-made flintlock rifle.

During the speech crowd shots showed Tom Selleck, several current and former Congress critters, and others not of the hoi polloi.

Finally, entertainment. Comedian T. Bubba Bechtol preached the bubba lifestyle while a deaf interpreter gamely became part of his routine when he asked her if she could sign "widgeedidgee" and bubbette." NRA life member and country-rock star Miranda Lambert closed out the night with a concert.

We had fun and enjoyed a night out with gunnies. 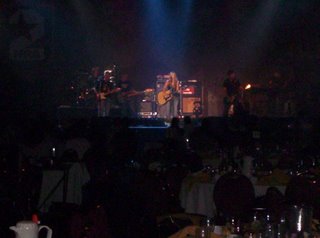